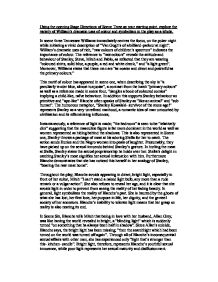 Using the opening Stage Directions of Scene Three as your starting point, explore the variety of William's dramatic uses of colour and symbolism in the play as a whole. In scene three Tennessee Williams immediately centres the focus, on the poker night while initiating a vivid description of "Van Gogh's of a billiard-parlour at night". William's dramatic uses of rich, "raw colours of children's spectrum" indicates the importance of colour. The reference to "raw colours" reveals the attitude and behaviour of Stanley, Steve, Mitch and Pablo, as reflected that they are wearing "coloured shirts, solid blue, a purple, a red and white check," and "a light green". Moreover, Williams states that these men are "as coarse and direct and powerful as the primary colours." This motif of colour has appeared in scene one, when describing the sky is "a peculiarly tender blue, almost turquoise", a contrast from the harsh "primary colours" as well as a reference made in scene four, "dangles a book of coloured comics" implying a child-like, na�ve behaviour. ...read more.

Throughout the play, Blanche avoids appearing in direct, bright light, especially in front of her suitor, Mitch "I can't stand a naked light bulb, any more than a rude remark or a vulgar action". She also refuses to reveal her age, and it is clear that she avoids light in order to prevent from seeing the reality of her fading beauty. In general, light symbolizes the reality of Blanche's past. She is haunted by the ghosts of what she has lost, her first love, her purpose in life, her dignity, and the genteel society of her ancestors. Blanche's inability to tolerate light means that her grasp on reality is also nearing its end. In Scene Six, Blanche tells Mitch that being in love with her husband, Allan Grey, was like having the world revealed in bright, a "blinding light" which is suddenly turned "on something that ha always been half in shadow". Since Allan's suicide, Blanche says, the bright light has been missing; "then the searchlight which had been turned on the world was turned off again". ...read more.

Two women, one white and one black, sit as equals on the steps of an apartment building while Blanche arrives on scene accoutered in the attitude and finery of a southern belle of yesteryear. She is an alien, a strange creature from another time, another place. Stella and Blanche come from a world that is rapidly dying. Belle Reve, their family's ancestral plantation, has been lost. The two sisters, symbolically, are the last living members of their family. Stella will mingle her blood with a man of blue-collar stock, and Blanche will enter the world of madness. Stanley represents the new order of the South: chivalry is dead, replaced by a "rat race". William's uses a variety of dramatic uses of colour and symbolism in the play as a whole, to integrate the themes together establishing how Blanche is threaten with this new rivalry society which Stella has clearly adapted herself into. Williams validates that unbridled s****l desire will lead to isolating darkness and eventually death. This is clearly shown, when Blanche takes a streetcar named "Desire" (s*x), transfers to one named "Cemeteries" (Death), and gets off at a street named "Elysian Fields" (the Afterlife). ...read more.