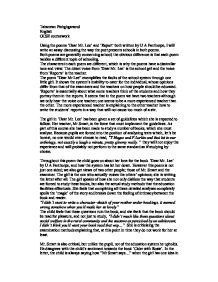 Using the poems 'Dear Mr. Lee' and 'Report' both written by U A Fanthorpe, I will write an assay discussing the way the poet presents schools in both poems.

Tahamtan Pishghgaravol English GCSE coursework Using the poems `Dear Mr. Lee' and `Report' both written by U A Fanthorpe, I will write an assay discussing the way the poet presents schools in both poems. Both poems are generally concerning school; the obvious difference is that each poem tackles a different topic of schooling. The characters in each poem are different, which is why the poems have a dissimilar tone and view. The direct voice from `Dear Mr. Lee' is the school girl and the voice from `Reports' is the teacher. The poem "Dear Mr Lee" exemplifies the faults of the school system through one little girl. It shows the system's inability to cater for the individual, whose opinions differ from that of the examiners and the teachers on how people should be educated. `Reports' is essentially about what some teachers think of the students and how they portray them in the reports. It seems that in the poem we have two teachers although we only hear the voice one teacher; one seems to be a more experienced teacher than the other. ...read more.

she feels that the book should be read for pleasure, and not just to study, "I didn't much like those questions about social welfare in the rural community and the seasons as perceived by an adolescent, I didn't think you'd want your book read that way..." She is criticising the examination methods explaining that, at this point in time they do not work for her at least. Mr. Smart is also critical, but unlike the pupil, not of the education system he upholds. He disagrees with the child's sentiment towards the book `Cider with Rosie'. In the letter, the child is always saying how "Mr Smart says..." when the girl has one idea in her head, he always tells her things, which completely conflict with her prior beliefs. "...But Mr Smart says Spain isn't like that all Timeshare villas and Torremolinos" He implicitly undermines her faith, destroying her self-esteem. This is a terrible relationship, certainly not one that any child should have with their teacher. They should be stimulated and encouraged, not put down. ...read more.

It is not really a clich�, since it does not mean that something which is satisfactory should satisfy but that parents should be satisfied to read that their child has been judged satisfactory, so the parents should be satisfied with the report, because the report writer is satisfied with their child. But at no point do we learn what it is that has satisfied the teacher, nor what might be a standard for being "satisfactory". As we read `Reports' we find the tone of the poem is negative because it indicates how some teachers judge students. The poem does link to my thesis and we find out that the teacher is a bitter man, which may've become lazy from years of teaching, and is trying to pass on his distress to a new and hopeful teacher. However `Dear Mr. Lee' has a positive tone in spite of criticism of the teachings and examining of English. It's showing that students can still enjoy a subject even if the teacher uses discouraging methods of teaching the student. Therefore both poems present school from different perspectives showing what some teachers and students think of the education system. Fanthorpe opinion seems to be that children may still succeed despite some teaching scheme. ...read more.