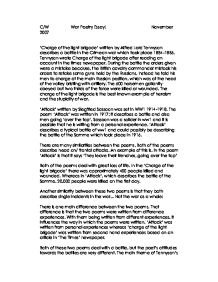 C/W War Poetry Essay! November 2007 'Charge of the light brigade' written by Alfred Lord Tennyson describes a battle in the Crimean war which took place 1854-1856. Tennyson wrote Charge of the light brigade after reading an account in the times newspaper. During the battle the orders given were a mistake because, the British cavalry commander mistook his orders to retake some guns held by the Russians. Instead he told his men to charge at the main Russian position, which was at the head of the valley bristling with artillery. The 600 horsemen gallantly obeyed but two thirds of the force were killed or wounded. The charge of the light brigade is the best known example of heroism and the stupidity of war. 'Attack' written by Siegfried Sassoon was set in WW1 1914-1918. The poem 'Attack' was written in 1917; it describes a battle and also men going 'over the top'. Sassoon was a solider in ww1 and it is possible that he is writing from a personal experience. 'Attack' describes a typical battle of ww1 and could possibly be describing the battle of the Somme which took place in 1916. ...read more.

The main theme of Tennyson's poem is that he wants the soldiers to be remembered as heroes and honoured for their courage. An example of how Tennyson makes the soldiers seem glorious is: in stanza 3, he says "stormed at with shot and shell, boldly they rode and well, and into the jaws of death, into the mouth of h**l rode the six hundred." This shows that even though the soldiers knew that they were probably going to die, they still went out into no-mans land and fought! The main theme of Sassoon's poem 'Attack' is that he wants to show the misery, fear and the suffering of the soldiers. He also wants to show how the soldiers are not heroes; they are just people obeying orders. An example of how Sassoon does show this is the line "men jostle and climb to meet the bristling fire" this shows that the men had to fight physically and mentally to be able to carry on fighting! Each of the two poems has lines referring to men fighting! In Tennyson's poem 'Charge of the Light Brigade' Tennyson used the line 'Forward the light brigade, charge for the guns!' ...read more.

It also shows how the soldiers don't want to be in battle... it shows this by saying 'O Jesu make it stop' with it saying that, it changes the tone of the poem and it shows you the reality the soldiers are going through! Both of the two poems use a lot of poetic language. Repetition is used, especially in the poem 'Charge of The Light Brigade'. In this poem they use repetition in every stanza. But they do keep repeating that it is 600 soldiers... this is emotive and also puts emphasis on the amount of soldiers in the battle! Onomatopoeia is used in the poem 'Attack' quite a lot. Some of the examples that are used are: 'drifting...menacing...roars...ticks' the effects of using onomatopoeia is that it makes the poem seem more lifelike. It helps you understand why the poet chose those words. Overall I think I prefer the poem 'Attack' By Alfred Tennyson. I prefer this poem because it is written from first hand, personal experiences. With it being written from personal experiences I think it helps the reader understand the trauma that the soldiers were really going through. It also helps build a better picture in your mind of how the soldiers had to physically and mentally carry on. Kate Gray 10Z ...read more.