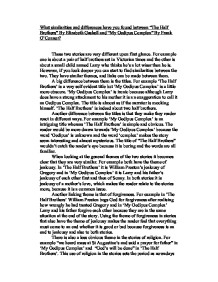 What similarities and differences have you found between

For example William Preston is jealous of Gregory, "he took a positive dislike to Gregory - he was so jealous of the ready love that always gushed out like a spring of fresh water when he came near." This quotation shows the complexity of the character relationships in the story very well by using a simile. In this way the story mirrors real life therefore making it easier for the reader to relate to. The plots of the two stories have both similarities and differences. For example a similarity would be the beginning of the stories because both the narrators have a parent missing, although under different circumstances, however they end differently. The differences in the stories make it more interesting for the reader to compare them. They would obviously have some differences as they were written in different periods by different authors and set in different times. The settings are both similar and different. For example 'The Half Brothers' is set in Cumberland in Victorian times and 'My Oedipus Complex' is set in Ireland just after the First World War. These settings appear to be very different but are set in the countryside, which gives them a similar rustic charm. Both stories have similar elements in their settings. Time is the major difference to the changed setting not location. ...read more.