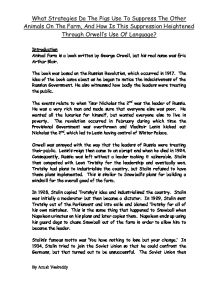 What Strategies Do The Pigs Use To Suppress The Other Animals On The Farm, And How Is This Suppression Heightened Through Orwell's Use Of Language?

Introduction Animal Farm is a book written by George Orwell, but his real name was Eric Arthur Blair. The book was based on the Russian Revolution, which occurred in 1917. The idea of the book came about as he began to notice the indecisiveness of the Russian Government. He also witnessed how badly the leaders were treating the public. The events relate to when Tsar Nicholas the 2nd was the leader of Russia. He was a very rich man and made sure that everyone else was poor. He wanted all the luxuries for himself, but wanted everyone else to live in poverty. The revolution occurred in February during which time the Provisional Government was overthrown and Vladimir Lenin kicked out Nicholas the 2nd, which led to Lenin having control of Winter Palace. Orwell was annoyed with the way that the leaders of Russia were treating their public. Lenin's reign then came to an abrupt end when he died in 1924. Consequently, Russia was left without a leader making it vulnerable. Stalin then competed with Leon Trotsky for the leadership and eventually won. Trotsky had plans to industrialise the country, but Stalin refused to have these plans implemented. This is similar to Snowball's plans for building a windmill for the overall good of the farm. In 1928, Stalin copied Trotsky's idea and industrialised the country. ...read more.

This suppressed the animals, because they would get confused with what to do and their only leader was Napoleon whom they would follow. Taking advantage of the good characteristics of the animals was another way of suppressing them. Boxer was an important character that was admired by the other animals. His obedience and loyalty was taken advantage of by Napoleon and Squealer who used him to convey their decisions to the other animals. Another strategy is terror. This is a very brutal yet effective way to suppress the animals. This action is carried out when Napoleon is training Jessie's pups and turning them into vicious dogs that can kill anyone who argues with Napoleon's decisions. Another form of terror is the threat of execution and starvation, which was very cruel. This suppresses the animals because the animals obviously want live and do not want to be executed. Also they need food to live and to stay healthy. This sets them back because if they disobey Napoleon they get punished severely. An additional form of suppression is shown in the strategy of the control of information. This happens when Napoleon has secret meetings with fellow pigs and he stops meetings with all the animals, so that he can easily make decisions. This suppresses the animals because they do not know what is happening in the meetings. ...read more.

Irony is also used when the pigs walk upright; this is ironic because they emulate the one creature that they rebelled against and the whole point of Animal Farm's existence. Conclusion In conclusion, Animal Farm is a book that educates us not only on the Russian rebellion and other events under the powerful control of Stalin, but it teaches us of the nature of rebellion. It shows us the steady degradation of a rebellion, and democracy being the only way for equality to work. For example, rather than the farm becoming a place with democracy, they made it a place full of capitalist pigs dominating in a fascist nature. The book was written as a criticism of humans, the point being how dangerous the Soviet Union was and of how evil man's nature can be if power and control is in reach. It teaches us that man will take power when offered it or when it is vulnerable and will do anything to procure it, for example when Frederick and Pilkington tried to influence Napoleon to join their confederation after the rebellion. This is an allegory for when America and England approached Soviet Russia after World War II, but the fighting continued into the Cold War. The novel in a way hints that something of the same nature will happen, and that there are many terrible up comings and threats heading our way. The moral of this book is that power corrupts. ?? ?? ?? ?? By Anush Vasireddy ...read more.