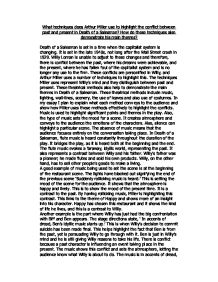 What techniques does Arthur Miller use to highlight the conflict between past and present in Death of a Salesman? How do these techniques also demonstrate his main themes?

What techniques does Arthur Miller use to highlight the conflict between past and present in Death of a Salesman? How do these techniques also demonstrate his main themes? Death of a Salesman is set in a time when the capitalist system is changing. It is set in the late 1940s, not long after the Wall Street crash in 1929. w***y Loman is unable to adjust to these changes and therefore, there is conflict between the past, where his dreams were achievable, and the present, where he has fallen foul of the capitalist system and is no longer any use to the firm. These conflicts are personified in w***y, and Arthur Miller uses a number of techniques to highlight this. The techniques Miller uses represent w***y's mind and they distinguish between past and present. These theatrical methods also help to demonstrate the main themes in Death of a Salesman. These theatrical methods include music, lighting, wall-lines, scenery, the use of leaves and also use of costumes. In my essay I plan to explain what each method conveys to the audience and show how Miller uses these methods effectively to highlight the conflicts. Music is used to highlight significant points and themes in the play. Also, the type of music sets the mood for a scene. ...read more.

w***y is going into his past and we see it as dark. The darkness shows us that w***y feels it is a dark, secret event. The woman is laughing from the darkness which shows she is part of this. He wants to put the event out of his mind and ignore it, that is why it is in shadow. Miller uses lighting to demonstrate his main themes as well. At the very beginning of the play the stage directions are as follows , ' Only the blue light of the sky falls upon the house and forestage; the surrounding area shows an angry glow of orange.' This is demonstrating to the audience the fact that w***y and his house are trapped by the surroundings. The house is the only thing in the calm blue light, whereas the apartments and buildings around are lit with an angry orange. This represents w***y at present, trapped by his dreams and his inability to adjust to the changes around him. A theme that Miller constantly tries t o get across throughout Death of a Salesman. The use of wall-lines is to distinguish between the past and the present, which highlights conflict. The stage directions state, ' Whenever the action is in the present the actors observe the imaginary wall-lines, entering the house only through it's door at the left. ...read more.

This is illustrated by the apartment buildings rising into focus at the very end. Miller uses leaves in the play to represent the passing of time. The leaves fall at points in the play to signify the fact that as time goes on, the more w***y's inner-conflict is becoming apparent. We see the leaves when we first go into the past, ' the entire house and surroundings become covered in leaves.' The leaves in the past are green and visible whereas in the present the leaves are not seen. The leaves highlight the conflict between past and present in this way; they represent w***y's dreams. In the past they are green and alive as this is at a time when w***y's dreams were achievable. In the present however, the leaves are no longer visible. As his dreams become less reachable the leaves fade away with this. The leaves also demonstrate the theme that w***y is trapped. He is trapped by his dreams and this causes inner-conflict. It is highlighted by the leaves, as the leaves are green and alive when w***y does not have this trapped feeling, yet when he is wracked by inner-conflict the leaves do not appear, as though they are dead. This is representing that his dreams are dead, as he is unable to adjust to the changes in the capitalist system and he is feeling trapped by his inability to change with the times. Also in the scene ...read more.

This essay engages superbly with the question. There is a sustained focus on the question, and techniques are analysed with confidence. I particularly liked how there was a strong awareness of the significance of theatrical devices, rather than simply analysing ...

This essay engages superbly with the question. There is a sustained focus on the question, and techniques are analysed with confidence. I particularly liked how there was a strong awareness of the significance of theatrical devices, rather than simply analysing Death of A Salesman as a text. When writing about drama, examiners will always credit for the understanding of its context, and in my experience this sort of insight will be awarded the top band at GCSE. All the points are relevant and great, but I feel this essay missed out on one major technique. Miller uses mobile concurrencies of past and present (not flashbacks) where Willy's loss of control is made evident through these events. This would've been a very sophisticated discussion point, allowing some high level analysis.

The analysis here is strong, and there is always an understanding of how Miller's techniques affect the audience's response. I particularly liked how this essay writes about Miller's constructions rather than simply stating things happen. For example phrases such as "Miller uses lighting to demonstrate" shows you have an awareness of techniques having a purpose, naturally forcing you to discuss this. Once in a while this essay will write as if characters are real, for example "he wants to put the event out of his mind and ignore it, that is why it is in shadow." It is essential you don't simply retell the plot or explain what quotes mean, but look at the dramatic effect of techniques. This essay manages this well. Examiners are looking for analysis of language, form and structure but I feel the language analysis is lacking here. It is vital you maintain a good balance, and as mentioned above a discussion of Miller's mobile concurrencies of past and present would be a great way to focus on language used. If I were answering this essay, I would've looked at the effectiveness of techniques. Simple staging techniques such as lighting, walls, and music allow the audience to engage with the conflicts of past and present, which then contextualise and emphasise Willy's internal conflict as a protagonist. A discussion of tragedy would've been relevant here.

This essay has a good structure. The clear and strong introduction allows for a focused argument throughout, with points always being relevant to the task. Paragraphs all start with a clear signpost which is able to summarise the point whilst linking it back to the question. I like this skill, as it shows the ability to craft a strong argument, and examiners will be thankful for a well structured argument. I feel this essay would've benefited from phrases such as "therefore" or "thus" to show a progression through the essay, making it more convincing. It was a shame to see the last paragraph cut off, and the lack of a conclusion. A conclusion is a great chance to offer a justified judgement and a final insight to the purpose of Miller's presentation of past and present being at conflict. Spelling, punctuation and grammar are fine.