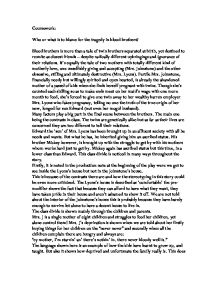 Who or what is to blame for the tragedy in blood brothers?

Coursework: Who or what is to blame for the tragedy in blood brothers? Blood brothers is more than a tale of twin brothers separated at birth, yet destined to reunite as closest friends - despite radically different upbringings and ignorance of their relations. It's equally the tale of two mothers with totally different kind of motherly love, one unselfishly giving and accepting (Mrs. Johnstone) and the other obsessive, stifling and ultimately destructive (Mrs. Lyons). Fertile Mrs. Johnstone, financially needy but willingly spirited and open hearted, is already the abandoned mother of a passel of kids when she finds herself pregnant with twins. Though she's counted each shilling so as to make ends meet on her maid's wage with one more mouth to feed, she's forced to give one twin away to her wealthy barren employer Mrs. Lyons who fakes pregnancy, telling no one the truth of the true origin of her new, longed for son Edward (not even her mogul husband). Many factors play a big part in the final scene between the brothers. The main one being the contrasts in class. The twins are genetically alike but as far as their lives are concerned they are too different to tell their relations. ...read more.

The lack of the father figure in the Johnstone household can make the discipline of the children uncontrollable and of a very low level. Mrs. L however, is happily married and has a son, which she has always wanted. She only has one child which is not hers. This shows the difference in maternal control between the two women. The Lyons family is well off and have no financial worries and can afford to buy things cash in hand instead of on the "never never". The language is also of some contrast: "p****d off. You say smashing things don't you? Do you know any more words like that?" This shows how the influence of the parents has played a big part in the lives of their children. Edward hears a regularly spoken swear word but yet fails to recognize what it actually means, also he speaks grammatically correct and speaks every letter. Whereas Mickey teaches the swear words to Eddie and speaks a lot off slang and does so infront of his mother who does not show an ounce of bother. Mrs. J works as a cleaner for Mrs. L and makes just enough to get by. ...read more.

The narrator is constantly reminded us of the dangers of acting like Mrs.J is and its as if she is destined to suffer from what happens in the last scene. The narrator is referring to the devil being after Mrs.J all the time and this shows that no matter what she does it will never be to satisfaction that she is doomed.mrs.L is not superstitious but manipulates Mrs.J's beliefs and says that the twins must never find the truth just so she can protect herself. In all honesty I believe that the main reason for the tragedy is the divide in class. As a result of the contrast in class, both twins suffer from different upbringings and jealousy which leads to the final devastation. The great differences between the alike characters lead to problems in society, they end up in trouble with the police, both liking the same girl, both move as a result of knowing each other. These all contribute to the two innocent lives. If I was to place the blame on anyone it would be the two mothers, as they made the promise to accept n receive the child and promise to keep the secret in the first place if they never kept them apart from each other and the truth then the shoot out would not have been even considered. BY CLAIRE SCOTT 10T ...read more.