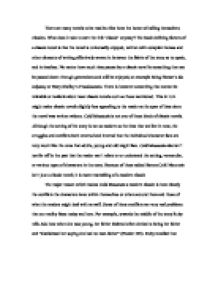 Why Cold Mountain is Considered a Modern Classic.

There are many novels to be read but few have the honor of calling themselves classics. What does it take to earn the title 'classic' anyway? The basic defining factors of a classic novel is that the novel is universally enjoyed, written with complex themes and other elements of writing effectively woven in between the fabric of the story so to speak, and is timeless. No matter how much time passes by a classic novel is something that can be passed down through generations and still be enjoyed; an example being Homer's the Odyssey or Mary Shelley's Frankenstein. There is however something that cannot be relatable or realistic about most classic novels such as those mentioned. This in turn might make classic novels slightly less appealing to the reader as the span of time since the novel was written widens. Cold Mountain is not one of those kinds of classic novels. Although the setting of the story is not as modern as the time that we live in now, the struggles and conflicts both external and internal that the individual character face are very much like the ones that adults, young and old might face. ...read more.

did not help in the slightest. Afterwards, when Ada's father Monroe accompanied by his faithful daughter went about getting themselves acquainted with the locals, they were greeted with scorn and indifference. Ada then also suffered a loss when her father passed away. Ada had a very good relationship with her father and at one point she even declared "[she] would follow this old man to Liberia if he asked [her] to do so" (Frazier 54). For that reason, naturally, she was swept over with grief just like any person would be at the death of her father no matter how much she and we know that death comes to take everyone at the end of their timeline. Charles Frazier wrote in the novel after Monroe's death that "nature has a preference for a particular order: parents die, then children die. But it was a harsh design, offering little relief from pain..." (Frazier 39) This type of misfortune adds to the novels appeal and timelessness because through this tribulation that Ada undergoes, she appears to readers to be more human and real and relatable no matter who at what time is reading because this kind of grief is something that everyone throughout the ages will understand. ...read more.

To express these, Frazier uses various writing techniques to introduce them. The technique he uses continuously throughout the novel is flashbacks. As the story of Ada and Inman unfurls, Frazier uses flashbacks to add necessary background information and to be able to further tell the story of all the characters in the story. Another effective writing technique Frazier uses is beginning the book in medias res. Beginning a story in medias res holds a more dramatic effect on the whole story. Additionally, Frazier writes all the dialogue between all the characters with the correct vernacular of the time and location. This gives them more of an identity and also adds to the overall artistic touch of the novel. As a result of all the reasons provided as to why Cold Mountain is a modern classic, the most important reason why the novel is a modern classic which cannot be true if not for those reasons is that the novel is timeless. No matter how much time elapses between the time the novel is written and read, the novel remains universally known and loved. The journey, hardships, and romance are things that are understood and enjoyed by a majority and will continue to be printed, read, and enjoyed by readers generations to come. ...read more.