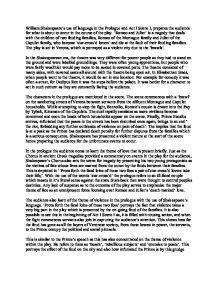 William Shakespeares use of language in the Prologue and Act I Scene I, prepares the audience for what is about to occur in the course of the play.

William Shakespeare's use of language in the Prologue and Act I Scene I, prepares the audience for what is about to occur in the course of the play. 'Romeo and Juliet' is a tragedy that deals with the children of two feuding families, Romeo of the Montague family and Juliet of the Capulet family, who become 'star-cross'd lovers' and die at the fault of their feuding families. The play is set in Verona, which is portrayed as a violent city due to the 'brawls'. In the Shakespearean era, the theatre was very different for poorer people as they had to stand on the ground and were labelled groundlings. They were often young apprentices, but people who were fairly wealthier would pay more to be seated in covered parts. ...read more.

The implies that the feud is at a peak as the Prince has declared death penalty for further disputes from the families which is a serious consequence. Shakespeare has presented a violent nature at the start of the scene hence preparing the audience for the unfortunate events to occur. In the prologue the audience come to learn the theme of love that is present briefly. Just as the Chorus in ancient Greek tragedies provided a commentary on events in the play for the audience, Shakespeare's Chorus also sets the scene for tragedy by presenting his two young protagonists as the victims of fate whose lives are marred from the outset by the feuds between their families. This is depicted in ' From forth the fatal loins of these two foes a pair of star-cross'd lovers take their life;'. ...read more.

This shows how far the feud has gone as all the layers of Veronese society, from those lowest in power, the servants, to the Prince occupy the political and social pinnacle. This is similar to the Prince's speech as this has also concentrated on the theme of violence within the play. He refers to them as 'beasts', 'rebellious subjects' and 'enemies to peace'. This portrays the effect of the feud on the city and also how infuriated the Prince is by this grudge between the families. 'Your lives shall pay the forfeit of the peace' shows the severity of the situation as the punishment is the death penalty. Shakespeare uses this to reinforce the idea that something severe is about to happen. This also creates sense of suspense within the audience as they already are aware of the fact that there shall be death in the play and may assume that this may be the cause. ...read more.