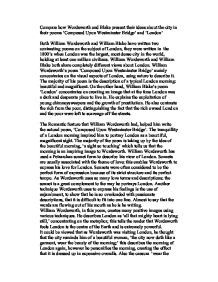 Compare how Wordsworth and Blake present their ideas about the city in their poems 'Composed Upon Westminster Bridge' and 'London' Both William Wordsworth and William Blake have written two contrasting poems on the subject of London, they were written in the 1800's when London was the largest, most dense city in the world, holding at least one million civilians. William Wordsworth and William Blake both share completely different views about London. William Wordsworth's poem 'Composed Upon Westminster Bridge' mainly concentrates on the visual aspects of London, using nature to describe it. The majority of his poem is the description of a typical London morning: beautiful and magnificent. On the other hand, William Blake's poem 'London' concentrates on creating an image that at the time London was a dark and desperate place to live in. He explains the exploitation of young chimneysweepers and the growth of prostitution. He also contrasts the rich from the poor, distinguishing the fact that the rich owned London and the poor were left to scavenge off the streets. The Romantic feature that William Wordsworth had, helped him write the natural poem, 'Composed Upon Westminster Bridge'. The tranquillity of a London morning inspired him to portray London as a beautiful, magnificent sight. The majority of the poem is taking up by the idea of the beautiful morning, 'a sight so touching' which tells us that the morning is an inspiring image to Wordsworth. ...read more.

'Majesty' describes the city as royal, meaning that London is the most important thing to Wordsworth. Wordsworth surprisingly doesn't use alliteration in this poem, however when he uses 'a sight so touching in its majesty,' this tells the reader that he is using sibilance to express his excitement. As you can see Wordsworth concentrates on visual aspects of London, buildings, architecture and the glorious morning. He doesn't comment on the people surrounding him. In contrast, Blake's poem 'London' paints a very different picture of the city. Blake describes his time in the city as a dark and desperate experience. From wealth to poverty, this is the description Blake uses to complain against the way the city is governed, almost to say that the wealthier people are to blame for the misfortunes of the poorer people and children. The reader will realise the strict organisation of the rhyme scheme 'ABAB' all the way through this poem. Almost to tell the reader that the strictness correlates with the way London is ran by the government, harsh and desperately controlled. Also it is split up in four quatrains, with each alternate line rhyming. The poem also has a strong and steady rhythm, which compliments the repetition Blake uses in 'London' and allows him to put a picture in the readers mind, that Blake is writing the poem as he is walking through the city, to show that he is writing it as he sees it. ...read more.

The diction has a tremendous effect on the reader, using these words helps the reader to understand the condition of London at the time. London was experiencing a time of great unrest, due to the aftermath of the French revolution. Blake decided to exploit the way London was governed during his visit to London, which inspired him to criticize society and political causes strained the people, in everyway; money; which lead to women prostitution, restrictions; which gave people no freedom, and the way people were treated by the government; lead to depression and despair. Wordsworth also had written his poem at this time, a time of unrest; however, other things had his mind concentrated on, the magnificent buildings and the beautiful London morning, maybe these were the only positives about London during that period of time, but Wordsworth took advantage of those strengths. In a way both poems fill one another's: Wordsworth visualised London as it had beautiful scenery but didn't talk about the political issues and the surrounding desperation of the people. On the other hand Blake only situated his thoughts on the government and the people who were in despair, but didn't comment on the nature of London, probably because his mind was too focused on the terrible state the city was in. On the whole, 'London' and 'Composed Upon Westminster Bridge' were both two very different poems in every way. ...read more.