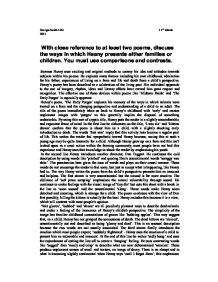 With close reference to at least two poems, discuss the ways in which Heany presents either families or children. You must use comparisons and contrasts.

Georgia Smith 10H 11th March 2001 With close reference to at least two poems, discuss the ways in which Heany presents either families or children. You must use comparisons and contrasts. Seamus Heany uses exciting and original methods to convey his ides and attitudes towards subjects within his poems. He explores many themes including his own childhood, admiration for his father, experiences of living on a farm and life and death from a child's perspective. Heany's poetry has been described as a celebration of the living past. His individual approach to the use of imagery, rhythm, ideas and literary effects have earned him great respect and recognition. The effective use of these devices within poems like 'Midterm Break' and 'The Early Purges' is especially apparent. Heany's poem, 'The Early Purges' explores his memory of the ways in which animals were treated on a farm and the changing perspective and understanding of a child to an adult. The title of the poem immediately takes us back to Heany's childhood with 'early' and creates unpleasant images with 'purges' as this generally implies the disposal of something undesirable. By using this sort of cryptic title, Heany puts the reader in a slightly uncomfortable and expectant frame of mind. ...read more.

He ends a poem with the blunt but adult view that on a well-run farm pests have to be kept down. This unequivocal statement makes complete sense. Throughout the poem Heany uses the constant mixture and contrast of the casual to the disturbing. He presents children as innocent and sensitive. The effective use of contrasting vocabulary and steady rhythm give the poem a balanced feeling which results in a clear understanding of how, as perspectives change so do attitudes. Heany explores many different childhood experiences within his poetry. When he was 14, his younger brother was killed in an accident. 'Mid-Term Break' is a poem he wrote as an adult looking back on his brother's funeral. He looks at his reaction to the death and how he feels about the people around him at the time. The first stanza of the poem creates a sense of expectation as it includes lots of detail. We can tell immediately, again, from 'mid-term' and 'college' that it is about Heany's childhood. The detail of how he 'sat' and the exactness of the time; 'two o'clock' are all very descriptive but tell us nothing about how he feels. This indicates that, as a child, he feels confused and lonely about such a tragedy. ...read more.

'Gaudy' is a word implying tackiness and fun, so it is strange when describing a dead person but Heany manages to jolt the reader in to recognising the seriousness with 'knocked', without sensationalising the accident. The last line of the poem is singled out. After regular three line stanzas the last stanza is singular and the pathos captures the detachment that Heany has presented within himself throughout the poem. Heany presents children and family using visual images and symbols in this poem. We can see the bond between the family members but also the total isolation caused by such a devastating tragedy. It is clear that in these two poems Heany has not undermined children in anyway, he has presented them in a very complex light. It is strange how different the reactions to death are in 'The Early Purges' and 'Mid-Term Break'. Heany has explored two similar themes but created such different responses to them. The ideas, attitudes and experiences are put forward in thoughtful and intricate ways. In 'The Early Purges' he focuses on the innocence of children and then in 'Mid-Term Break' he concentrates on their responsibility and ability to adapt to situations. The techniques he uses are greatly effective and I find his poetry both interesting and moving. ...read more.