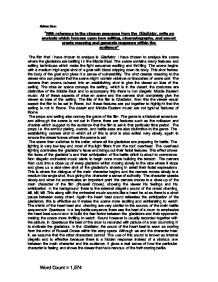 &quot;With reference to the chosen sequence from the Gladiator, write an analysis which focuses upon how editing, cinematography, and sound create meaning and generate response within the audience&quot;

Saleem Deen "With reference to the chosen sequence from the Gladiator, write an analysis which focuses upon how editing, cinematography, and sound create meaning and generate response within the audience" The film that I have chosen to analyse is Gladiator. I have chosen to analyse the scene where the gladiators are battling in the Middle East. The scene contains many features and editing techniques which make the fight sequence exciting and thrilling. The scene begins with a medium high angle shot of a goat with blood dripping down its body. This shot frames the body of the goat and gives it a sense of vulnerability. The shot creates meaning to the viewer who can predict that the scene might contain violence or bloodshed of some sort. The camera then zooms outward into an establishing shot to give the viewer an idea of the setting. The mise en scene conveys the setting, which is in the desert, the costumes are distinctive of the Middle East and to accompany this there is non diegetic Middle Eastern music. All of these aspects of mise en scene and the camera shot completely give the viewer an idea of the setting. ...read more.

Although we and the character hear it, we assume that the other characters cannot. The use of this sound is known as internal diegetic and is effective because there is a hidden response instead of a obvious one between the main character and the audience. It gives a real sense of how the particular character is feeling and shows the viewer that he is nervous of the forthcoming battle. In Gladiator, the scene then switches to the opponents of the gladiator's who are shot in slow motion, waving their swords and swinging the weapons ready for battle. The slow motion shot makes them seem menacing and stronger than in normal speed as the shot slows down their actions giving the viewer a complete idea of their strength and brutality. Whereas in normal speed most of their actions wouldn't be noticed as it would be too fast for the viewer to get any real meaning out of the specific sequence. The sound of the battle axe swinging is dubbed in slow motion along with the other noises to lengthen the anticipation effect, making the viewer feel as if they can't wait for the battle. The camera then moves through the gate slowly and moves into a close up of every gladiator, once more overhead lighting is present bringing out the fear on their faces. ...read more.

He almost feels bemused by the whole experience of the crowd chanting for the killing of people. He is staring vividly at the crowd whilst they chant in his favour and the same shot keeps revolving around him but at the same time the camera is rotating quicker and the focus of the camera is unclear. The non-diegetic Middle Eastern music is also getting quicker. This could mean that he is feeling dizzy and feels the battle as a haze. The music then begins to go quieter and at this stage the 360� shot turns to the crowd instead of Russell Crowe and here the camera begins to become dark and unclear, this is where the next scene begins. This use of the 360� is effective as it ends the scene mysteriously. The shot is fast and distorted leaving the viewer longing for more exciting and thrilling battles. And because the scene is early on in the film, the viewer could predict more battles to come after the mysterious and distorted ending. In conclusion, the scene contains many camera and editing techniques such as low and high angle shots, quick speed and order of editing and the camera shot behind the netting. All of these shots created a specific meaning to the audience and are intended to create a specific response. WORD COUNT 1,574 Word Count = 1,574 ...read more.