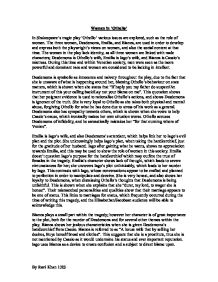 Women in 'Othello' In Shakespeare's tragic play 'Othello' various issues are explored, such as the role of women.

Women in 'Othello' In Shakespeare's tragic play 'Othello' various issues are explored, such as the role of women. The three women, Desdemona, Emilia, and Bianca, are used in order to develop and express both the playwright's views on women, and also the social context at that time. The women in the play lack identity, as all three women are linked with male characters; Desdemona is Othello's wife, Emilia is Iago's wife, and Bianca is Cassio's mistress. During this time and within Venetian society, men were seen as the more powerful and dominant race and women are considered to be lacking in intellect. Desdemona is symbolic as innocence and naivety throughout the play, due to the fact that she is unaware of what is happening around her, blaming Othello's behaviour on ...read more.

Desdemona also has sympathy towards others, which is shown when she vows to help Cassio's cause, which ironically makes her own situation worse. Othello accuses Desdemona of infidelity, and he sarcastically mistakes her "for that cunning w***e of Venice". Emilia is Iago's wife, and also Desdemona's attendant, which helps link her to Iago's evil plan and the plot. She unknowingly helps Iago's plan, when taking the handkerchief, just for the gratitude of her husband. Iago after gaining what he wants, shows no appreciation towards Emilia, and this may be used to show the role of women in this society. Emilia doesn't question Iago's purpose for the handkerchief which may outline the trust of females in the tragedy. ...read more.

This links to marriages for status, which frequently occurred during the time of writing this tragedy, and the Elizabethan/Jacobean audience will be able to acknowledge this. Bianca plays a small part within the tragedy; however her character is of great importance to the plot, both for the murder of Desdemona and for several other themes within the play. Bianca shows her jealous characteristics when she is given Desdemona's handkerchief from Cassio. Bianca is referred to as "A house wife that by selling her desires, Buys herself bread and clothes". This suggests that she is a prostitute, thus she is not mentioned by Cassio as it would undermine his status and ever important reputation. Iago uses Bianca as a device to create confusion and a subject to direct blame upon. ?? ?? ?? ?? By Ravi Khan 13IS ...read more.

The introduction to this essay promises a very strong argument, however it was a shame that some of these concepts were not explored. The essay superbly picks out the evidence and suggests the meanings, however it does not address the ...

The introduction to this essay promises a very strong argument, however it was a shame that some of these concepts were not explored. The essay superbly picks out the evidence and suggests the meanings, however it does not address the audience response or why Shakespeare has chosen to do so. It is this extra discussion which stops this essay from getting top marks.

The analysis in this essay is sound, with quotations being used to show good knowledge of each of the women. I liked how there was a comparison to the men, however there needed to be closer analysis of the way men describe women, and direct comparison of their language. The understanding of the women's traits is good, but it lacks the discussion of audience response or significance to the play. If I was doing this essay, I would've spoken about the patriarchal influence on the contemporary audience, and the fact that Shakespeare gives Bianca the opportunity to prevent Othello's downfall. The essay acknowledges Bianca's importance simply, but a greater awareness of dramatic effect and the direct effect on the audience would've gained higher marks. I would've liked to have seen some imagery analysed, as Iago describes women in a derogatory manner. The essay could've explored terms such as tragedy, delving into a discussion debating whether Othello is, in fact, a tragedy of women.

This essay has a strong introduction, but lacks any conclusion. It is well structured, addressing each woman individually, however I wanted to see a conclusion wrapping up the significance of women in the play. Spelling, punctuation and grammar are strong throughout.