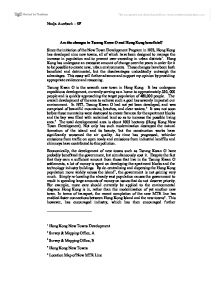 Are the changes in Tsueng Kwan O and Hong Kong beneficial

Are the changes in Tseung Kwan O and Hong Kong beneficial? Since the initiation of the New Town Development Program in 1973, Hong Kong has developed nine new towns, all of which have been designed to manage the increase in population and to prevent over-crowding in urban districts1. Hong Kong has undergone an excessive amount of change over the years in order for it to be possible to create new, urban environments. These changes have been both beneficial and detrimental, but the disadvantages undoubtedly outweigh the advantages. This essay will further advance and support my opinion by providing appropriate evidence and reasoning. Tseung Kwan O is the seventh new town in Hong Kong. It has undergone expeditious development, currently serving as a home to approximately 330, 000 people and is quickly approaching the target population of 480,000 people. ...read more.

Despite the fact that they earn a sufficient amount from those that live in the Tseung Kwan O settlements, a lot of money is spent on developing the apartment blocks and the technology industry buildings. By de-centralizing and dispersing the Hong Kong population more widely across the island4, the government is not gaining very much. Simply re-locating the already vast population causes the government to result in spending large amounts of money on issues that do not deserve priority. For example, more care should currently be applied to the environmental disgrace Hong Kong is in, rather than the modernization of yet another new town. In terms of transport, the recent completion of the new MTR line has enabled faster connections between Hong Kong Island and the new towns5. This however, has encouraged industry, which has then encouraged further development of industrial factories and buildings, which has then led to a higher demand for reclaimed land and space. ...read more.

This then benefits and looks after the less fortunate in the Hong Kong community. Eventually the numbers of those in need increased, until new towns were housing more than one quarter of Hong Kong's population.7 The construction of yet another generation of new towns soon followed, Tseung Kwan O, Tin Shui Wai and Fan Ling, doubling the stress that the previous generation had put on the environment and culture. Therefore, in summary, it is evident that the government's policy of establishing new towns in order to absorb Hong Kong's inevitable urbanization has achieved its core near term social objectives. This said, the toll such rapid urbanization has taken on the environment is not trivial and needs to be considered in the overall measure of success. It is arguable that environmental degradation of such magnitude has created significant long term negative social impact. ...read more.