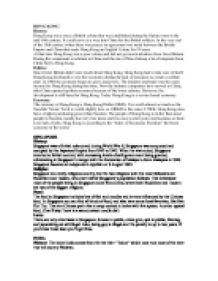 HONG KONG History: Hong Kong was a once a British colony that was established during the Opium wars in the mid-19th century. It could serve as a way into China for the British soldiers. In the very end of the 19th century (when there was peace) an agreement was made between the British Empire and China that made Hong Kong an English Colony for 99 years. At that time Hong Kong was a poor colony and did not get much attention from Great Britain. During the communist revolution in China and the rise of Mao Zedong a lot of migrants from China fled to Hong Kong. Politics: Since Great Britain didn't care much about Hong Kong, Hong Kong had to take care of itself. Hong Kong developed a very free economy during the lack of resources to create a welfare state. In 1960 the economy began to grow, massively. The industry and trade was the main income for Hong Kong during that time. Now the industry companies have moved to China, after China opened up their economy because of the lower salaries. However, the development is still based in Hong Kong. Today Hong Kong is a service based economy. ...read more.

About thousand years ago before Christ, they started to build large cities in India. And the Vedic religion evolved and the inhabitants worshiped many different gods. And eventually the Dravidian people got into India and about 1500 people who got into India spoke Indo-European languages. Around 500 years before Christ the Buddhism religion also developed in India. The British imperial had a lot of power in India. They soon controlled all of India, either by their own soldiers, officials and laws or under the Indian princes (furstar). When India was a British colony the country developed in many ways, the Britons invested in railways and education for some group. At the same time oppressed the British Indian population and made sure that everything in the country favored the British. In the late 1800 the Indian of the middle class wanted the country to become independent from the Britons. Some formed the Indian National Congress, which soon became a very large organization. It was led by ''Mahatma'' Gandhi, who believed that the problem would not be solved with violence. Instead they should not follow the British rules and buy the British goods, in the end, the Britons agreed to allow India to become independent. ...read more.

Religion: The Philippines is a Christian country where more than 90% of the inhabitants are Christians but it's divided into two sections. Nearly 80% of the whole population belongs to the Roman Catholic Church and the rest which is 10 % belongs to Christian denominations. Five to ten percent of the population is Muslim Industry: The Philippines industry has a big influence to the rest of the world because the country produces some main products. Some of their production is: food, tobacco, plastic and textile products, all kind of clothing, leather products, wood, paper products, printing and publishing, furniture and electronics. But the heavier industries are dominated by the production of glass, cement, industrial chemicals, mineral products, transport equipment and refined petroleum products. The industrial part is focused in city areas, particularly in the Manila region. Geography and Climate: The Philippines, which includes almost 7000 islands is located in the southeast coast of Asia. The climate in The Philippines is very tropical climate with a lot of rainy and dry seasons. The summer brings heavy rainfalls while the winter season brings cooler and drier air but the temperatures don't often rise above 37 �C. The Philippines has suffered severely times from nature disaster like earthquakes, floods and drought. ...read more.