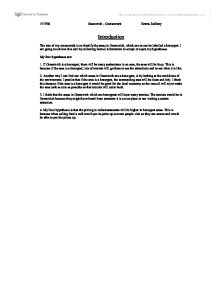 Is Greenwich a honeypot?

Introduction The aim of my coursework is to identify the areas in Greenwich, which are or can be labelled a honeypot. I am going to achieve this aim by collecting factual information to accept or reject my hypotheses. My four hypotheses are: 1. If Greenwich is a honeypot, there will be many pedestrians in an area, the area will be busy. This is because if the area is a honeypot, lots of tourists will go there to see the attractions and to see what it is like. 2. Another way I can find out which areas in Greenwich are a honeypot, is by looking at the conditions of the environment. I predict that if the area is a honeypot, the surrounding area will be clean and tidy. I think this because if the area is a honeypot it would be good for the local economy so the council will try to make the area look as nice as possible so that tourists will come back. 3. I think that the areas in Greenwich which are honeypots will have many tourists. The tourists would be in Greenwich because they might have heard from someone it is a nice place or are visiting a certain attraction. 4. My final hypothesis is that the pricing in cafes/restaurants will be higher in honeypot areas. ...read more.

Some examples of honeypots in the UK are; Bowness-on-Windermere (the lake district, a national park) and Swan age (Dorset, a coastal town). Methodology Our year 10 geography class travelled to Greenwich on May 9th 2008 to carry out coursework which would find out which areas in Greenwich are honeypots. We travelled to Greenwich via tube and DLR. After we arrived at the Cutty Sark (meeting point) we split into groups of around four or five and we were given an area in which to conduct data, either supporting or rejecting our hypotheses. We arrived at our site around 11.00, when we started our pedestrian count. 1. To make our pedestrian count fair the groups all started the pedestrian count at the same time and we all counted for ten minutes. I carried out the pedestrian count because I wanted to find information which would lead me to find out which areas of Greenwich are honeypots, by counting the number of people walking past a certain point within the allocated area (St Mary's Gate) . This data would help me to find and show which areas in Greenwich are honeypots because I predict that if there are a lot of people the area is most likely to be a honeypot, as it is known that honeypots are often swamped with large numbers of people. ...read more.

The information was recorded like a tally on the questionnaire. The good thing about this survey is that you are asking the public, so will get any number of different results. However the questionnaire could not be truly fair because when asked, some people, presumably tourists, said that they did not speak English, so couldn't reply. Also at different times of the year eg, summer holidays, there are different peaks in the number of tourists. 4. I looked at pricing in cafes and bars for my fourth hypothesis because I wanted to see which areas in Greenwich are honeypot. My fourth hypothesis is that prices in cafes and bars would be more expensive in honeypot areas. I took all these prices quickly in a notebook so that when I was ready I could put it all into a table later. I got the pricing by going inside cafes or looking at their window menus. I took the price of 3 items, tea, coffee and cake, I chose these items because they are commonly sold in most cafes. The good thing about this method is that it more fair because it is the same food and beverage items that I am comparing. The bad thing though is that some areas did not have a caf� or bar and the pricing in one certain or bar may not reflect the average pricing for the area. ?? ?? ?? ?? 15/7/08 Greenwich - Coursework Emma Rafferty ...read more.