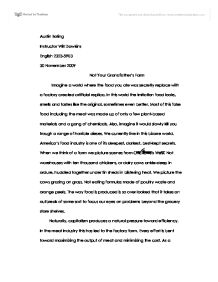 Not your Grandfather's Farm

Austin Boling Instructor Will Dawkins English 2323-5903 30 November 2009 Not Your Grandfather's Farm Imagine a world where the food you ate was secretly replace with a factory created artificial replica. In this world the imitation food looks, smells and tastes like the original, sometimes even better. Most of this fake food including the meat was made up of only a few plant-based materials and a gang of chemicals. Also, imagine it would slowly kill you trough a range of horrible dieses. We currently live in this bizarre world. America's food industry is one of its deepest, darkest, best-kept secrets. When we think of a farm we picture scenes from Charlotte's Web. Not warehouses with ten thousand chickens, or dairy cows ankle-deep in ordure, huddled together under tin sheds in blistering heat. We picture the cows grazing on grass. ...read more.

This wasteful and inefficient practice has forced agribusiness to exploit vast stretches of land. Forests, wetlands, and other natural ecosystems and wildlife habitats have been decimated and turned into crop and grazing land. Scarce fossil fuels, groundwater, and topsoil resources that took millenniums to develop are now disappearing. In addition, industrialized farms are threatening the well being of rural communities throughout the U.S., and citizens are increasingly working to block their construction in order to prevent pollution and protect the quality of life. Family farms have been the core of agrarian culture for thousands of years, providing the opportunity to connect with the land and to live in tune with the seasons and the weather. Traditional farmers don't produce more than the carrying capacity of the land. They understand the condition of the soil and its ability to sustain various crops from season to season. ...read more.

Despite repeated warnings from consumer advocates, the United States Department of Agriculture's meat inspection system remains grossly inadequate, and consumers are now being told to expect animal products to be tainted. Meanwhile, the agribusiness industry, rather than advising consumers to curb their intake of animal products, has devised extreme measures of overcooking and antibiotics. This helps consumers avoid the dangers of animal products and maintain their gross over-consumption of meat and dairy In conclusion, it seems like some appalling conspiracy straight from the pages of a George Orwell novel. Yet factory farming is not plot to manipulate the masses. It's not only of our making, but it also made us. Cheap food accounts for American prosperity. We spend less of our annual incomes on food than any other nation. According to Walsh, "Americans spend less than 10% of their incomes on food" (33). There are various hazards that stem from our cost efficient food. Consequently, they are the price of the American way of life. Maybe they are telling us that it is time to change. ...read more.