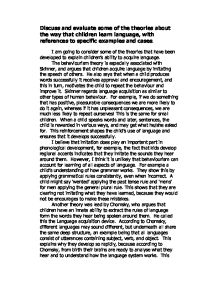 Discuss and evaluate some of the theories about the way that children learn language, with references to specific examples and cases.

Discuss and evaluate some of the theories about the way that children learn language, with references to specific examples and cases. I am going to consider some of the theories that have been developed to explain children's ability to acquire language. The behaviourism theory is especially associated with Skinner, and argues that children acquire language by imitating the speech of others. He also says that when a child produces words successfully it receives approval and encouragement, and this in turn, motivates the child to repeat the behaviour and improve it. Skinner regards language acquisition as similar to other types of human behaviour. For example, if we do something that has positive, pleasurable consequences we are more likely to do it again, whereas if it has unpleasant consequences, we are much less likely to repeat ourselves! This is the same for small children. When a child speaks words and later, sentences, the child is rewarded in various ways, and may get what he/she asked for. This reinforcement shapes the child's use of language and ensures that it develops successfully. ...read more.

This theory could also explain what children from all cultures pass through similar stages of language development and why grammatical features are common in all languages. The main criticism of Chomsky is that it underestimates the role of interaction in language development. Chomsky's theory implies that if a child is exposed to language, the acquisition of language will happen immediately. There are many examples of how this cannot be true. Genie, a socially deprived 13yr old was found and brought back into society, and still she could not acquire language properly, she particularly struggled with grammar. She was continually exposed to language, but still found it difficult to produce anything more than single words after years. Jean Piaget developed the cognition theories. These theories basically say that children are only able to learn language when they are at the right intellectual development stage. Stages in language acquisition are said to be linked to the stages in cognitive development. For example, a child has the ability to arrange objects such as sticks in increasing or decreasing size. ...read more.

Bruner was a main theorist associated with this area of language acquisition. For example, parents speak more slowly to children than they do to other adults. They use less complex vocabulary and simplified constructions. This definitely makes it easier for the child to imitate its parents, and learning is made less demanding. Parents also tend to expand what their child says, for example is a child says, 'sweets allgone' the parent might reply by saying 'yes, the sweets are all gone- you have eaten them all haven't you?' by means of this, the child's vocabulary is gradually extended. This theory is very difficult to measure, but it seems that it isn't really essential for adults to address children in a particular way, for example different cultures and traditions tend not to speak this way and their child still succeed in acquiring language. However, I believe that interaction does play an important role in the development of children. All of the theories that I have looked at I believe all contribute to language acquisition, and that they do need to be present for a child to be a fully competent user of language. ...read more.