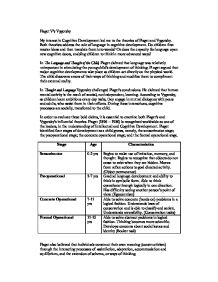 Piaget V's Vygotsky My interest in Cognitive Development led me to the theories of Piaget and Vygotsky. Both theorists address the role of language in cognitive development. Do children first master ideas and then translate them into words? Or does the capacity for language open new cognitive doors, enabling children to think in more advanced ways? In The Language and Thought of the Child, Piaget claimed that language was relatively unimportant in stimulating the young child's development of thinking. Piaget argued that major cognitive developments take place as children act directly on the physical world. The child discovers errors of their ways of thinking and modifies them to compliment their external reality. In Thought and Language Vygotsky challenged Piaget's conclusions. He claimed that human mental activity is the result of social, not independent, learning. According to Vygotsky, as children learn ambitious every day tasks, they engage in mutual dialogues with peers and adults, who assist them in their efforts. During these interactions, cognitive processes are socially, transferred to the child. ...read more.

Through Vygotsky's studies, we can see how a child progresses through the stages of concept development and how adults, through the medium of language, provide the bridge of learning. There are three underlying themes, which unify Vygotsky's complex theory. The first being the importance of 'Culture', the second is the 'central role of language' and the third is what Vygotsky calls the 'zone of proximal development'. According to Vygotsky, in terms of development, the one thing that separates us from other animals is our use of tools and symbols. As a result of these we create cultures. Our cultures grow and change as we develop, and employ extremely powerful influences on all of us. They dictate what we have to learn, and the sorts of skills we need to develop. The second theme of Vygotsky's theory, is the 'Central role of Language'. Language is made possible because of our culture (tools and symbols). Social processes bring about the learning of language, and language ultimately makes thought possible. ...read more.

There is little doubt that there is still much to be learned from both Piaget and Vygotsky, and in many cases the strengths from one theorist complement the weaknesses of the other. Both Piaget's and Vygotsky's theories are applied within the educational system which reflects the importance of their theories. So without external pressure, can the child's cognitive development, be explained by self-motivation? Or in contrast, do social interactions with adults and peers create cognitive development? This debate could undoubtedly be carried on for many years, however over the past two decades; researchers have carried out many studies to determine which of these two views are valid. Almost all the findings have sided with Vygotsky. As a result, children's speech-to-self is now referred to as private speech instead of egocentric speech. Nevertheless, Glassman (1991) argued that it is wrong to see Piaget and Vygotsky as opposites, because they are similar in their central core. Piaget focused upon the natural laws of intellectual development while Vygotsky concentrated on the impact of social processes and culture. A union of both views might therefore be extremely worthwhile. ...read more.