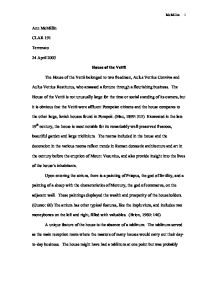 Pompeii - House of the Vettii.

Ann McMillin CLAR 191 Terrenato 24 April 2003 House of the Vettii The House of the Vettii belonged to two freedmen, Aulus Vettius Conviva and Aulus Vettius Restitutus, who amassed a fortune through a flourishing business. The House of the Vettii is not unusually large for the time or social standing of its owners, but it is obvious that the Vettii were affluent Pompeian citizens and the house compares to the other large, lavish houses found in Pompeii. (Mau, 1899: 315) Excavated in the late 19th century, the house is most notable for its remarkably well-preserved frescoes, beautiful garden and large triclinium. The rooms included in the house and the decoration in the various rooms reflect trends in Roman domestic architecture and art in the century before the eruption of Mount Vesuvius, and also provide insight into the lives of the house's inhabitants. Upon entering the atrium, there is a painting of Priapus, the god of fertility, and a painting of a sheep with the characteristics of Mercury, the god of commerce, on the adjacent wall. These paintings displayed the wealth and prosperity of the householders. (Guzzo: 60) The atrium has other typical features, like the impluvium, and includes two moneyboxes on the left and right, filled with valuables. (Brion, 1960: 146) A unique feature of the house is the absence of a tablinum. The tablinum served as the main reception room where the masters of many houses would carry out their day-to-day business. ...read more.

The garden was ornately decorated with fountains, statues and shrubs. There were numerous small sculptures from which water fell into basins. The water pipes under the garden were so well preserved, that it was found upon excavation that it would be possible to repair them. The columns of the portico were also well preserved, which were white with capitals molded in stucco and painted various colors. (Mau, 1899: 317-320) Every aspect of the peristyle remained somewhat intact, so after replanting the shrubs and other foliage, the peristyle probably looked a lot like it did prior to the volcanic eruption 2,000 years ago. Horticulturists were able to remake the flowerbeds of roses, violets and hyacinths, and were even able to rule out flowers that they were not sure whether or not the Pompeiians knew and would have used in their gardens. (Brion, 1960: 149) Peristyles and gardens were increasing in social importance in the 1st century. The peristyle was the most private part of the house, and only the closest friends of the household were invited to enter. (Amery, 2002: 109) The gardens often included benches and paths, which family members could use for reflection and leisure activities. The size of the peristyle vis-�-vis the rest of the House of the Vettii indicates its social importance to the household. "They reflect the fashion, which caught on in the first part of the Imperial age, for imitating in the confined space of town houses the verdant vistas and free-standing sculptures of sumptuous country villas." ...read more.

(Amery, 2002: 127) The wall paintings found in the House of the Vettii make it the house most representative of the fourth style. The style originated from previous styles that were focused on more architectural or theatrical designs that attempted to emulate Hellenistic buildings and give an architectural dimension to flat walls. (Amery, 2002: 123-125) The walls in the House of the Vettii give the house's interior a refined, luxuriant appearance. Andrew Wallace-Hadrill The House of the Vettii was not extraordinarily unique from the other high class houses uncovered in Pompeii, but its small differences shed light into the lives of its inhabitants. The similarities the House of the Vettii shared with other large Pompeian town houses can be seen together to reveal social trends and ancient Roman sentiment. Marcel Brion wrote: This phenomenon, extraordinary enough in itself, of a civilization miraculously preserved under the ashes of a volcano, had the power to capture men's imaginations. They readily-and somewhat immoderately-pictured intact houses with all objects remaining exactly where they were at the moment of the eruption; they imagined they were going to enter into intimate contact with a people vanished all those long centuries ago and to learn the secrets of their life. (Brion, 1960: 225) The House of the Vettii was an amazing example of this phenomenon, with its elaborate frescoes and sculptured garden being preserved for centuries under the volcanic ash. Even the bronze pots and pans remain where they were found on the stove in the kitchen. The tragedy of the volcano has been a surprising gift to archaeologists and historians searching for answers. 1 McMillin ...read more.