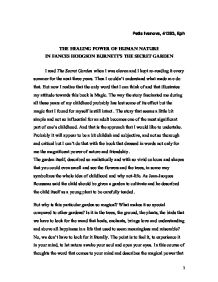 Petia Ivanova, 41263, Eph The Healing Power of Human Nature in Fances Hodgson Burnett's The Secret Garden I read The Secret Garden when I was eleven and I kept re-reading it every summer for the next three years. Then I couldn't understand what made me do that. But now I realize that the only word that I can think of and that illustrates my attitude towards this book is Magic. The way the story fascinated me during all these years of my childhood probably has lost some of its effect but the magic that I found for myself is still intact . The story that seems a little bit simple and not so influential for an adult becomes one of the most significant part of one's childhood. And that is the approach that I would like to undertake. Probably it will appear to be a bit childish and subjective, and not so thorough and critical but I can't do that with the book that dressed in words not only for me the magnificent power of nature and friendship. ...read more.

In this course of thoughts the word that comes to your mind and describes the magical power that you experience while reading the book is Hope. Hope is what the characters in the book will find not only in the garden, that is their catalyser, but most importantly in themselves and each other in a time when all of them need it desperately. Mary's mother neglects her for social gaieties and then, along with Mary's father, dies in a cholera epidemic, all in the book's first chapter; Colin's mother died when he was born. Archibald Craven is incapacitated by his excessive grief and avoids both Colin and Mary. When Mary arrives at Misselthwaite Manor, she learns about the garden from the first caregiver to offer her psychological as well as physical nurture, the servant Martha. In the first part of the book, Mary is still a child who needs mothering, especially because she is too "independent" and "self-contained" (Keyser ); psychologically unconnected to others, she is also detached from her own feelings. ...read more.

entered the garden and declared, "I am going to live forever"As he makes the trip home, Craven acknowledges that, in his earlier anger that "the child was alive and the mother was dead," "he had not felt like a father at all" (289; ch. 27). Perhaps aware that he needs to learn how to nurture, he stops at Mother Sowerby's cottage; she is away helping a woman with a new baby, but he recognizes, apparently for the first time, that the Sowerby children are "a healthy likable lot," and he gives them "a golden sovereign" (291; ch. 27). Craven must learn also to receive, however, if he is to give of himself as well as of his money. Still an isolate as Mary was at the beginning of the book, he must retrace her steps. After a brief visit to the manor, feeling "on earth again," Craven takes "his way, as Mary had done, through the door in the shrubbery and among the laurels and the fountain beds" to the garden (293; ch. 27). ...read more.