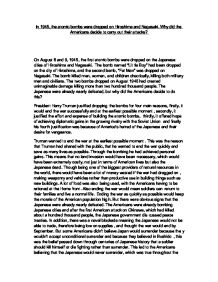 In 1945, the atomic bombs were dropped on Hiroshima and Nagasaki. Why did the Americans decide to carry out their attacks? On August 6 and 9, 1945, the first atomic bombs were dropped on the Japanese cities of Hiroshima and Nagasaki. The bomb named "Little Boy" had been dropped on the city of Hiroshima, and the second bomb, "Fat Man" was dropped on Nagasaki. The bomb killed men, women, and children chaotically, killing both military men and civilians. The two bombs dropped on August 1945 had created unimaginable damage killing more than two hundred thousand people. The Japanese were already nearly defeated, but why did the Americans decide to do this? President Harry Truman justified dropping the bombs for four main reasons, firstly, it would end the war successfully and at the earliest possible moment, secondly, it justified the effort and expense of building the atomic bombs, thirdly, it offered hope of achieving diplomatic gains in the growing rivalry with the Soviet Union and finally his fourth justification was because of America's hatred of the Japanese and their desire for vengeance. ...read more.

This led to the Americans believing that the Japanese would never surrender, which was true throughout the majority of the Pacific War. The dropping of the bomb justifies the effort and expense of building the weapons of mass destruction. With $2billion spent on the Manhattan project, the people of America needed to be presented with the money well spent. By dropping the bomb and ending the war, this would impress the American people and respect Truman as a good leader. This also meant Truman would avoid a Congressional inquiry to the misappropriation of $2billion. He also wanted another term of office. His chances of re-election would have been thin if the American public knew that he wasted money and American lives by not using a weapon that would have ended the war quickly. Russia wanted to split Europe in half, owning Western Europe, so countries like Poland and Germany. The USA was against this, and had a mutual view with the rest of Europe. The relationship between USA and USSR grew tense between February and July 1945, due to that event, later called the Iron Curtain. ...read more.

These statistics would have been a lot higher but the Japanese misjudged their timing and attack while the fleet were on a routine session in the Pacific. The Americans wanted vengeance for the unprovoked attack on the American Navy, and wanted revenge for their attempt to wipe them out. The Americans felt that dropping the bomb would have been a suitable counter as if they had succeeded they would have won the war at sea. In conclusion of this, I think the main reason that Truman dropped the bomb was mainly for his own personal issues; wanting to be re-elected as president and to avoid a congressional hearing. He tried to make out that it was solely for military reasons. He dropped the bomb to show what it can do, that the $2billion wasn't wasted on a weapon that is being shelved. Despite his decision, there were many reasons to not drop the bomb; the damage caused is one of them, killing hundreds of thousands of innocent people, and some Americans lost respect for the president, but in a sense, it showed Truman's determination for his gain, as he showed that this was a risk to be taken to gain success. ...read more.