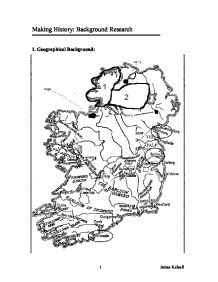 Making History: Background Research 1. Geographical Background: Area 1 is Tyrconnell - The area that O'Donnell ruled Area 2 is County Tyrone - The area that O Neil ruled Both of these are in the area that we now know as Northern Ireland. Also marked on the map: * Kinsale * Derry * Dublin * Newry * Sligo * Dundalk All these places are referred to in the play and are all non fictional. 2. Elizabethan English Occupation of Ireland: The time after the horrible massacre that the English considered as the salvation of the savage Celts and is called the English Invasion was every bit as horrible as the war. The English, still considering the Irish to be savage beasts, treated them like slaves. One king who was infamous for his cruelty to the Irish people is Henry VIII. From the beginning of his reign, Henry VIII undertook a self goal to destroy the very basic of Irish resistance by wiping out their culture. Ridiculous laws restricting marriage, fosterage, the use of native literature and language, and every other tradition of the Irish were reenacted. Another of Henry's devices for the conquest of Ireland was the kidnapping of noblemen's sons and having them reared and educated in England, hostile to every tradition and instinct of their nationality. ...read more.

Earl of Tyrone: The Earl of Tyrone was an Irish title created several times. It was created first in 1542 for The O'Neill M�r, King of Tir Eoghan, Conn Bacach O'Neill, who submitted to the English king Henry VIII and was rewarded with the title of Earl. Shane O'Neill was was considered by some to have been the second earl. However, he went into rebellion and was killed before the title could be conferred. The title was forfeited in 1608 by his grandson, the third earl: Hugh. In making history, the Earl of Tyrone and Hugh O'Neil can both be historically proven. 5. Brian Friel: i) Background Born 9 January 1929, Catholic, in Omagh, County Tyrone in Northern Ireland, Brian Friel is one of Ireland's most prominent playwrights. In addition to his published plays, he has written short stories; screenplays; film, TV and Radio adaptations of his plays; and several pieces of non-fiction on the role of theatre and the artist. ii) Influences Friel's early life had a strong influence on his writing. Though his father was a teacher, his grandparents, whose first language was Irish, were illiterate peasants from County Donegal whose first language was Irish. ...read more.

"He named himself as the "The O'Neil," and offered open rebellion to Queen Elizabeth's authority, but, despite assistance from Spain, was subdued by Essex and Mountjoy; was permitted to retain his earldom, but in James I.'s reign was again discovered intriguing with Spain; fled the country, and had his lands confiscated; d. 1616" Source: http://www.fromoldbooks.org/Wood-NuttallEncyclopaedia/t/tyronehughoneilearlof.html 11. Friels Agenda as a Playwright "Much of Friel's work has concerned Irish political issues, but plays such as Translations are easy for non-Irish audiences to understand and appreciate. Despite its portrayal of the English as unconscious oppressors, it generated wild enthusiasm in audiences in London's National Theatre during its extensive 1981 run. Making History (1989), set in Elizabethan Ireland, again concerns English oppression and is part of a historical cycle of plays. Friel's play Dancing at Lughnasa (1990) is a personal examination of a childhood in Ballybeg in the 1930s" http://www.bedfordstmartins.com/litLinks/drama/friel.htm Before he started writing plays he was a school teacher. He is almost definitely aware that his plays are studied, but personally it would seem a pointless exercise to simply write plays with the intention of having them studied and ruling out a great success of having them performed around the world such as his first play "Philadelphia, Here I Come!" ?? ?? ?? ?? 1 James Kelsall ...read more.