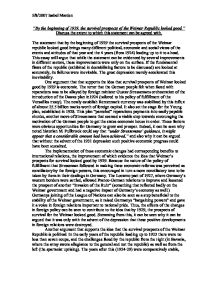 &quot;By the beginning of 1929, the survival prospects of the Weimar Republic looked good.&quot; Discuss the extent to which this statement can be agreed with.

"By the beginning of 1929, the survival prospects of the Weimar Republic looked good." Discuss the extent to which this statement can be agreed with. The statement that by the beginning of 1929 the survival prospects of the Weimar republic looked good brings many different political, economic and social views of the events and attitudes of that year and the 4 years (from 1924) leading up to it to a head. This essay will argue that while the statement can be evidenced by several improvements in different sectors, these improvements were only on the surface. If the fundamental flaws of the republic (exhibited in destabilizing factors to be discussed) are looked at accurately, its failures were inevitable. The great depression merely accelerated this inevitability. One argument that that supports the idea that survival prospects of Weimar looked good by 1929 is economic. The terror that the German people felt when faced with reparations was to be allayed by foreign minister Gustav Stressemans orchestration of the introduction of the Dawes plan in1924 (tailored to his policy of fulfillment of the Versailles treaty). The newly establish Rentenmark currency was stabilized by this influx of almost 25.5 billion marks worth of foreign capital. ...read more.

Another argument that supports the idea that the survival prospects of the Weimar Republic is political. In the early years of the republic leading up to 1923 there were no less than seven coups, and the challenges faced by the republic from the right (in Bavaria, where the army swore allegiance to the general and not the republic) as well as from the left (the spartacist uprising). The years after this (1924-29) were comparatively stable, with no major coups to speak of. In addition to this, Democratic Party majority in parliament had increased from 52% in May 1924 to 735 in May 1928. The election of Hindenburg as president in 1925 can also be seen as a positive step towards eventual cohesion of political systems, as the perception of him as a traditionalist was an assurance to conservatives that the Republic would protect their interests. Thus it can be seen why it can be argued that apparent political stability by 1929 contributed to the impression that the prospects of the Weimar Republics survival were good, and that had the depression of 1931 not occurred these political positives would have continued. However, with every positive comes a negative, and there are many historians with the belief that such arguments are superficial and ignorant of the very real (and evidenced) ...read more.

Workers were alienated economically also, with financial minister Bruning's harsh tax laws continued implementation (a move put into action with the noble goal of improving the economy following the hyperinflation of 1923).Agricultural production was hindered greatly by falling food prices, and the tough times faced by farmers and rural people were ripe for other solutions (which they found, as shown in the jump in the communist KPDs' rural membership by 10% in 1928). It can be seen that by 1929, all was definitely not positive economically and that this would not mean well for the prospects of Weimar's' survival, even with out The Great depression of 1931. In conclusion, it can be seen that while there were some positive economic, political and foreign policy developments from 1924 to 1929, these were merely on the surface and covered innumerable flaws in the Weimar system. The lack of understanding of democracy in German society, the negative perceptions and revisionist ideals leftover from the Versailles Treaty and the structurally induced economic weaknesses were all evident throughout the time period, and would have caused the republic eventual downfall. The great depression of 1931, while it sped up this process, was merely a catalyst. ?? ?? ?? ?? 5/8/2007 Isabel Marden ...read more.