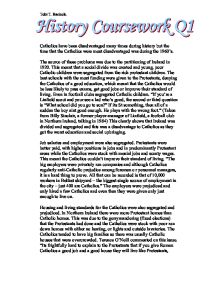 Catholics have been disadvantaged many times during history but the time that the Catholics were most disadvantaged was during the 1960's. The source of these problems was due to the partitioning of Ireland in 1920. This meant that a social divide was created and young, poor Catholic children were segregated from the rich protestant children. The best schools with the most funding were given to the Protestants, denying the Catholics of a good education, which meant that the Catholics would be less likely to pass exams, get good jobs or improve their standard of living. Even in football clubs segregated Catholic children. "If you're a Linfield scout and your see a lad who's good, the second or third question is "What school did you go to son?" If its St something, then all of a sudden the boy aint good enough. He plays with the wrong foot." (Taken from Billy Sinclair, a former player-manager of Linfield, a football club in Northern Ireland, talking in 1984) ...read more.

In Northern Ireland there were more Protestant homes than Catholic homes. This was due to the gerrymandering (fixed elections) that the Protestants had done and the Catholics were stuck with poor run down homes with either no heating, or lights and outside lavatories. The Catholics tended to have big families so there was usually Catholic houses that were overcrowded. Terence O'Neill commented on this issue. "Its frightfully hard to explain to the Protestants that if you give Roman Catholics a good job and a good house they will live like Protestants, because they will see neighbours with cars and television sets... They will refuse to have 18 children, but if they are jobless and live in the most ghastly hovel, they will rear 18 children on National Assistance..." (Taken from Terence O'Neill, Unionist Prime Minister.) The rent the Catholics had to pay was considerably more than what Protestants had to pay and the Protestants were given better houses too. ...read more.

In the law and order Catholics were segregated also. In Northern Ireland, the Royal Ulster Constibulary were considered the safest law - enforcing group but it was mostly Protestant and most of them were part of the Orange Order, which disliked Catholics intensely. B - specials were also another law enforcing group but who specialised in enforcing the law in any way necessary and were made up of hard - line loyalists. But many of the members were considered anti - Catholic and usually beat up Catholics that were passing in the street. The Catholics were disadvantaged greatly because of the prejudice that they faced by the Protestants. There were a lot of thing that the Catholics were discriminated against and they were disadvantaged greatly in nearly all areas of life but the main areas that they were discriminated against was in their Housing and living standards which tended to be shabby, dilapidated and neglected. Also the vicious style, the ignorance and the segregation that the Catholics faced lead to the growing discrimination of Catholics. Tobi T. Bankole. ...read more.