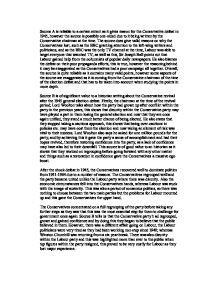 Source A is reliable to a certain extent as it gives reason for the Conservative defeat in 1945, however the source is possibly one-sided due to it being written by the Conservative chairman at the time. The source does give valid reasons on why the Conservatives lost, such as the BBC granting attention to the left-wing writers and politicians, and as the BBC was the only TV channel at the time, Labour was able to target everyone that watched TV, as well as this, Sir Joseph Ball points out that Labour gained help from the columnists of popular daily newspapers. He also blames the defeat on their poor propaganda efforts, this is true, however the reasoning behind it may be exaggerated as the Conservatives had a poor campaign all together. Overall, the source is quite reliable as it contains many valid points, however some aspects of the source are exaggerated as it is coming from the Conservative chairman of the time of the election defeat and that has to be taken into account when studying the points in more depth. ...read more.

After the shock defeat in 1945, the Conservatives recovered well to dominate politics from 1951-1964 due to a number of reasons. The Conservatives regrouped well and the party became united unlike the Labour party where there was disunity. Also the economic circumstances fell into the Conservatives hands, whereas Labour was stuck with the image of austerity. This was also a period of consensus politics, so there was nothing to choose between the two main parties but the problems for Labour mounted up and this gave the Conservatives the upper hand. The Conservatives concentrated on a full regrouping of the party before taking any further steps as they saw that this was the most essential step for them to challenge for government once again. Source B tells us that the Conservative party h ad regrouped, grown and gained confidence and by doing this they began to believe that the public believed in them. However, there was a different affair going on Labour, the Labour politicians were very tired as they had been working non-stop since 1940; whereas Winston Churchill was returning from a six year break. ...read more.

Source D states that when Macmillan came into power, he stood by the consistent policy on the economy of the Conservative party which was wise and popular. This was a good move as altering it may have given an advantage to the Labour party as the economy was now playing such an important role towards public opinion. As well as this they had other similar polices, for example their foreign policy was practically the same as Labour's, they would have to follow the role of America due to the taking of Marshall Aid. With so little difference in policy and the Conservatives already in power, Labours chance to break into power could only come if the Conservatives made a major change in policy that would affect the public, however the Conservatives stayed consistent that is why they held onto power until 1964. All of the points outlined are reasons why the Conservatives dominated politics for so long, although some points are more important than others. The regrouping of the party and Labours disunity as well as consensus politics really did help the Conservatives, however the most important role for keeping the Conservatives in power for so long was due to the much improved and continuously improving economy. ...read more.