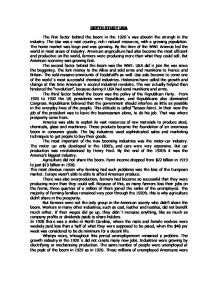 DEPTH STUDY USA The first factor behind the boom in the 1920�s was aboutn the strengh in the industry. The Usa was a vast country, rich i natural resources, with a growing population. The home market was large and was gorwing. By the time of the WW1 Amercia led the world in most areas of industry. American angriculture had also become the most efficient and producitve un the world, farmers were producing more than what they could sell. But American economy was growing fast. The second factor behind the boom was the WW1. USA did�n join the war since the beggining. The lent money to the Allies and sold arms and munitions to France and Britain. The sold massive ammounts of foodsfutffs as well. Usa aslo become to come one of the world�s most successful chemical industries. Historians have called the growth and change at this time American�s second industrial revolutio. The war actually helped than hindered the "revolution", because during it USA had send munitions and arms. The third factor behind the boom was the polivy of the Republican Party. From 1920 to 1932 the US presidents were Republican, and Republicans also dominated Congress. Republicans believed that the government should interfere as little as possible in the everyday lives of the people. This attitude is called "laissez-faire!. In their view the job of the president was to leave the businessman alone, to do his job. ...read more.

Many Italian's did not intend to settle in the USA but hoped to make money to take back to their families. In America's big cities the more established immigrant groups (Irish- Americans, French Canadian- Americands and German- Americans) competed for the best jobs and the best available housing. These groups tended to look down on the more recent eastern European and Italian immigrants. These in turn had nothing but contempt for Blacks and Mexicans, who were firmly at the bottom of the scale. In the 1920's these r****t attitudes were given additional weight by an increased fear of Bolshevism or communism. In the nineteenth century, in rural areas of America there was a very strong "temperance" movement. Members of temperance movements agreed not to drink alocohol and also campaigned to get other to give up alcohol. Most members of these movements were devout Christians who saw what damage alcohol did to familiy life. The temperance movements were so strong in some of the rural areas taht they persuaded their state governments to prohibit the scale of alcohol within the state. Through the early twentieth century the campaign gathered place. It became a national campaign to prohibit alcohol troguhout the country. It acquired some powerful supporters, leading industrialists like Nelson Rockefeller backed the movement believing workers would be more reliable if they didn�t drink. ...read more.

most workers were liad off or were paid less and so the didnt bought any share, also most people instead of buying or investing their money they kept it. As nobody was buying shrares. People in the agricultural areas were hardest hit by the Depression, because the 1920s had not been kind to them anyway. Huge numbers of farmers were unable to pay their mortgages. They tried to avoid sheriffs and to make deals with banks. But some of them couldn�t do this. In the town the story was not much better. The level of unemployement grew rapidly. About the 50% of each state was unemployed. These people had to spend their nights in the park. People were accepted in some places. And other were accepted in hospitals becuase the suffered malnutrition or starvation. In 1932 Hoover was regarded as a "do nothing" president, also there was a saiyng that siad: " In Hoover we trusted, now we are busted". Obviously nobody wanted him as the President of the USA. He also did and said many things with which people didn�t agreed at all, like that the security of the poeple wasn�t his responsability, that the Nonus Marchers were criminals and communists and he orderd to attack them, to burn their possessions. Nobody was commfort with what Hoover was doing, and with what he had done, he was not popular at all. That�s why in 1932 Roosevelt won the elections. ...read more.