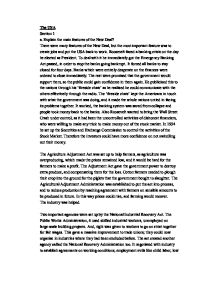 The USA Section 1 a. Explain the main features of the New Deal? There were many features of the New Deal, but the most important feature was to create jobs and put the USA back to work. Roosevelt faced a banking crisis on the day he elected as President. To deal with it he immediately got the Emergency Banking Act passed, in order to stop the banks going bankrupt. It forced all banks to stay closed for four days. Banks which were entirely desperate on the finances were ordered to close immediately. The rest were promised that the government would support them, so the public could gain confidence in them again. He publicised this to the nations through his 'fireside chats' as he realised he could communicate with the others effectively through the radio. The 'fireside chats' kept the Americans in touch with what the government was doing, and it made the whole nations untied in facing its problems together. It worked, the banking system was saved from collapse and people took money back to the banks. Also Roosevelt wanted to bring the Wall Street Crash under control, as it had been the uncontrolled activities of dishonest financiers, who were willing to make any trick to make money out of the stock market. In 1934 he set up the Securities and Exchange Commission to control the activities of the Stock Market. Therefore the investors could have more confidence on not swindling out their money. The Agriculture Adjustment Act was set up to help farmers, as agriculture was overproducing, which made the prices remained low, and it would be hard for the farmers to make a profit. The Adjustment Act gave the government power to destroy extra produce, and compensating them for the loss. Cotton farmers needed to plough their crop into the ground for the piglets that the government bought to slaughter. The Agricultural Adjustment Administration was established to put the act into process, and to reduce production by reaching agreement with farmers on sensible amounts to be produced in future. ...read more.

It doesn't say anything about t the law of prohibition being passed. The most different between sources A and B is in source A it says the most important of prohibition was the 'moral fervour', where in source B it says the most important was the Anti-Saloon League to 'stamp out the evils of drinks. Sources A and B only agree to an extent, even though they have some similarities , nevertheless source A does not really express it is for or against prohibition, whereas in sources B, it shows us it is strongly for prohibition. b. Study Sources C and D Were the artists of these two posters for or against Prohibition? The artists of Sources C and D were both for prohibition. I know this because source C describes the saloon as 'The poor man's club', suggesting that the saloon was making people who bought alcohols poor. The fat man on the right dressed in high quality cloths was the owner of the saloon; he had one of his hands on the cash machine and one sticking out to the man ready to take his money. It was saying that he was making a lot of profit out of the poor, he was prospered. The man on the left was wearing a lower quality of cloth compared to the owner was described as a slave of the saloon, because he was addicted to the alcohol, he had to drink it everyday, just like the slave they were forced to work, and had no choice. The other meanings of it were that the slave and the men both did not have a high wages. In source C the man was giving all his small weeks' wages to the saloon's owner to buy alcohol, whereas he was supposed to buy food back home for his wife and children. His wife and children were living in a very bad condition, sitting around the table, waiting for him to come back with food. ...read more.