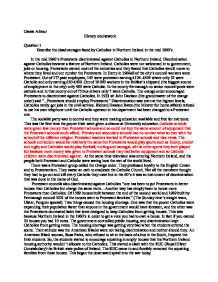 Describe the disadvantages faced by Catholics in Northern Ireland in the mid 1960&amp;#146;s

Cassie Arbour History coursework Question 1 Describe the disadvantages faced by Catholics in Northern Ireland in the mid 1960's In the mid 1960's Protestants discriminated against Catholics in Northern Ireland. Discrimination against Catholics became a feature of Northern Ireland. Catholics were not welcomed in to government, jobs or housing. Protestants owned most of the industries and they feared that Catholics would move to where they lived and out number the Protestants. In Derry in 1966all of the city's council workers were Protestant. Out of 177 paid employees, 145 were protestant earning �124-�424 where only 32 were Catholic and only earning �20-�420. Out of 10 000 workers in the Belfast's shipyard (the biggest source of employment in the city) only 400 were Catholic. In the county Fermanagh no senior council posts were catholic and in that county out of 75 bus drivers only 7 were Catholic. ...read more.

other sports they both played but because more money was given to Protestant schools they had better equipment and so Catholic children were discriminated against. At the same time television was entering Northern Ireland, and the people both Protestant and Catholic were seeing how the rest of the world lived. There was a Protestant group called the Orange order. They professed loyalty to the English Crown and to Protestantism. They swear an oath to eradicate the Catholic Church. Not all the members thought they had to go out and kill every Catholic they meet but in the 60's it was an instrument of discrimination that was done in the name of God. Protestant councils also discriminated against Catholics "one has been to put Protestants in better houses than Catholics but charge the same rents...Another way has simply been to house more Protestants than Catholics. ...read more.

So, the students started to encourage squatting in empty houses that the Northern Ireland housing authority wouldn't allocate to the Catholics. This started a clash with the RUC (Royal Ulster Constabulary) the British state police of Ireland. The RUC came in and forcibly removed the squatting families from these houses. This began the downward spiral into the war today. Unemployment for Catholics linked on with Poverty, poor medical health services and then a higher death rate. GERRYMANDER. Terrance O'Neill who was Protestant wanted to join Protestants and Catholics together. The Protestants did not like this idea and wanted O'Neill to go. In 1968 the Catholics marched peacefully for equality but they received a violent response. The Protestants thought the Catholics wanted to take over which was wrong. Fighting started and O'Neill resigned. Unionist leaders were deeply suspicious of socialism. Some of their actions to reduce the threat of the labour movement actually resulted in discrimination against Catholics. Discrimination started in the 1920's and 1930's so by now it was not an unusual thing. ...read more.