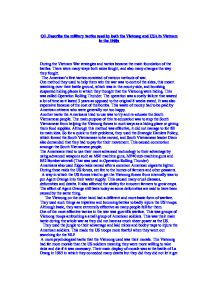 Q2 .Describe the military tactics used by both the Vietcong and USA in Vietnam in the 1960s During the Vietnam War strategies and tactics became the main foundation of the battles. There were many ways both sides fought, and also many changes the way they fought. The American's first tactics consisted of various methods of war. One method they used to help them win the war was to control the skies, this meant watching over their battle ground, which was in the county side, and bombing suspected hiding places in which they thought that the Vietcong were hiding. This was called Operation Rolling Thunder. The operation was a costly failure that wasted a lot of time as it lasted 3 years as opposed to the original 8 weeks stated. It was also expensive because of the cost of the bombs. This waste of money had to be paid by American citizens who were generally not too happy. Another tactic the Americans tried to use was to try and re-educate the South Vietnamese people. ...read more.

This was groups of Vietcong troops ambushing a small group of American soldiers. This was their main tactic during the whole war as they did not have as much sheer power as the US. They used the jungle to their advantage and laid mines and booby traps to injure the American soldiers. This made the US troops more fearful when they went out searching for the NLF A more psychological tactic that the Vietcong used was their morale. The Vietcong had far more morale than the US soldiers meaning they were more willing to take risks and die if it was necessary. Their main display of morale was at the battle of La Drang in 1965 in which they conceded many deaths but they did they did not let it get them down, which was almost the opposite of what the Americans were like. This tactic helped them though out the whole war. Chi Chi tunnels was the main survival tactic the Vietcong used. ...read more.

The Tet offensive was an attack on the Vietnamese New year on June 8th 1968 that was meant to have no combat during that time. This tactic paid off and caused heavy casualties for the Americans. The Vietcong also used a Saigon suicide squad to mostly damage hopes of winning rather than cause physical damage, although it did cause a lot of casualties. Both sides had their ups and downs in tactics, but the determination, morale and thought of improvement caused the Vietcong to be victorious over the Americans. Their victory was down to many factors of war. One reason was because the Americans did not take the Vietcong seriously and thought that it was a battle that would be easily one with sheer power. They were wrong. The way the NLF changed tactics after learning that they could not face America head on at La Drang is an improvement that maybe won them the battle. But overall, it seems that it was what they were fighting for that made the largest difference between the two sides. America fighting to prevent communism spreading, and the Vietcong fighting for their freedom. Christopher Otusile ...read more.