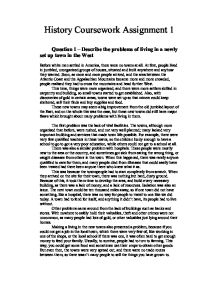 History Coursework Assignment 1 Question 1 - Describe the problems of living in a newly set up town in the West Before white men settled in America, there were no towns at all. At first, people lived in jumbled, unorganised groups of houses, situated and built anywhere and anyhow they wanted. Soon, as more and more people arrived, and the area between the Atlantic Coast and the Appalachian Mountains became more and more crowded, people realised they had to cross the mountains and head further West. This time, things were more organised, and there were more settlers skilled in carpentry and building, so small towns started to get established. Also, with discoveries of gold in certain areas, towns were set up so that miners could keep sheltered, sell their finds and buy supplies and food. These new towns may seem a big improvement from the old jumbled layout of the East, and on the whole this was the case, but these new towns did still have major flaws which brought about many problems with living in them. The first problem was the lack of vital facilities. The towns, although more organised than before, were rushed, and not very well planned; many lacked very important building and services that made town life possible. For example, there were very few qualified teachers in these towns, so the children lucky enough to have a school to go to got a very poor education, while others could not get to a school at all. There was also a similar problem with hospitals. These people were mostly new to the area or the country, and sometimes got sick from eating the wrong thing, or caught diseases from others in the town. When this happened, there was rarely anyone qualified to care for them, and many people died from illnesses that could easily have been treated had there been anyone there who knew what it as. ...read more.

In other areas, they did nothing, and crime, or what would have been crime if there were laws, ruled the areas. There were lots of robberies, murders, and groups of known criminals often had the say of what went on, as everyone was to scared to do otherwise. But, in some, vigilante groups reigned. These were groups of people that decided that they were the authoritative group in the town, and they were in charge of enforcing law. In some cases this worked, and the town had a fully functional justice system, and the lawlessness, and therefore the violence, subsided. But other areas, the vigilantes were not so fair, and the situation worsened. In some cases, the vigilantes would be biased, and use their authority to favour their friends and themselves, like arresting a rival shop owner, or convicting a someone they did not like for a crime they didn't commit. They were also open to bribes, and would sometimes do the above mentioned things for valuables, gold or a favour. The vigilantes could often be unfair in another way too. Very few towns had a prison, so there was no way of detaining someone who had been arrested, fairly or not. Because of this, the vigilantes would often give on the spot death sentences. This made it both easier to dispose of the criminals, or, if the person was innocent, not give anyone time to find out. This was often unjust, as there was no time for a trial, giving of evidence, and therefore a fair trial. As if all these things did not make the towns bad enough, there was one invention which added no end to both the violence and the lawlessness in the towns: Guns. When these were introduced, many people bought them, to protect themselves from the current violence and lawlessness. It was presumed by most that guns would put an end to the muggings, robberies and killings, as people would be able to protect themselves, but in most cases, this was not true. ...read more.

It also helped because as well as those who had nothing to worry about knew they were there so did those who had committed crimes. The public execution of the criminals they caught not only had an effect on those who were caught; if they were not killed, they were unlikely to reoffend, it also had an effect on the would-be criminals. The threat of execution put many people off committing a crime, and this deterrent reduced the crime levels even further. One town they did play a big part in was the mining town of Bannack. The citizens of this town were being terrorised by a group of highwaymen who carried out many robberies and murders. Soon, it became apparent that Henry Plummer, the elected sheriff of the town was a member of this gang, but with no lawmen, there was nothing the townsmen could legally do about it. Instead they set up a vigilante group. Plummer tried to flee, but was quickly caught, and hanged in 1864 So, in some places vigilantes did cause more trouble than they put a stop to. Sometimes the groups were corrupt, and simple used their authority to execute their business or social rivals, or simply killed people who didn't agree with them. Also, because of their harsh punishments, there was no time for a trial, and people were, undoubtedly, killed when they had done nothing wrong. But even so, their presence was still felt throughout the town, and even when they were not entirely fair, the prospect of death would still have stopped many would-be crimes. So, although they are often underestimated for their contribution to early town life, it is undoubted that, although they did not do some things their counterparts did, like go out to market and purchase food, or hold trials, there is no doubting that the things they did do, like educating the children, or enforcing the little law that there was, did play a major role in dealing with the problems of living in the early towns of the West. ...read more.