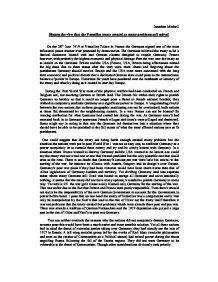 Discuss the view that the Versailles treaty created as many problems as it solved.

Jonathan Mitchell Discuss the view that the Versailles treaty created as many problems as it solved. On the 28th June 1919 at Versailles Palace in France the Germans signed one of the most influential peace treaties ever proposed by democracies. The Germans believed the treaty to be a farcical document littered with anti German clauses designed to cripple Germany. France however, with probably the highest economic and physical damage from the war, saw the treaty as to lenient on the Germans. Britain and the USA (France, USA, Britain being affectionate named the big three due to there status after the war) were more liberal and forgiving about the punishment Germany should receive. Britain and the USA were more concerned with the long term economic and political threats that a decimated German state could pose to the international balance of power in Europe. Historians for years have pondered over the harshness or leniency of the treaty and what by doing so it caused in later day Europe. During the First World War most of the physical warfare had been conducted on French and Belgium soil, not touching German or British land. ...read more.

Yet all three nations had in mind the threat of extremist parties taking over Germany, they had already see the acts of 1917 in Russia. A left wing socialist group led by the works of Karl Marx (socialist philosopher and seen as the creator of Communism as a Political stance) had seized power during the chaos engulfing Russia following the fall of the Tsarist regime. They did not want Germany to be vulnerable to the threat of Communism. Though other considerations obviously took priority. On the other hand any Treaty or actions that try to recreate borders and distinctions between countries and areas never work due to wide spread differentiating people's on land's, it was very naive of the Big three to presume this would work, Wilson's 14 points although more lenient to Germany still posed just as many territorial changes as the treaty although they were slightly less severe.. This recreation of false distinctions between countries was a down point of the treaty especially when the powers would not uphold what they had laid down this inevitably would cause problems in post war Germany as these kinds of actions had done before throughout the world. ...read more.

In saying that the treaty of Versailles was a complete failure and created all Europe's post war problems would be a massive overstatement, to say it was merely the best the Nations could do with the given situation and that all the problems which arose were little to do with the treaty would be an understatement. The real answer lies somewhere in between the two. The options of the Nations when creating the treaty were small but in being naive and not thinking forward to what certain clauses of the treaty might bring about they created problems. Yet no one could anticipate the rise of Hitler and the n**i's in Germany and although the treaty aided them in their rise it was one of many factors that lead to the rise of the n**i party in post Versailles Germany. In conclusion the treaty created a lot of problems some avoidable, some not, its resources were small yet its dealing with its resources was poor. Yet when the nations wanted such polar opposites for a post war Germany and Europe in general it is expected that some problems could and would arise. Keynes said post the signing of the treaty that "The Treaty by overstepping the limits of the possible, has in practice settled nothing". ...read more.