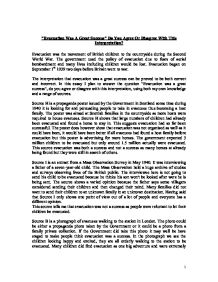 &quot;Evacuation Was A Great Success&quot; Do You Agree Or Disagree With This Interpretation?

"Evacuation Was A Great Success" Do You Agree Or Disagree With This Interpretation? Evacuation was the movement of British children to the countryside during the Second World War. The government used the policy of evacuation due to fears of aerial bombardment and many lives including children would be lost. Evacuation began on September 1st 1939 two days before Britain went to war. The interpretation that evacuation was a great success can be proved to be both correct and incorrect. In this essay I plan to answer the question "Evacuation was a great success", do you agree or disagree with this interpretation, using both my own knowledge and a range of sources. Source H is a propaganda poster issued by the Government in Scotland some time during 1940 it is looking for and persuading people to take in evacuees thus becoming a host family. The poster was aimed at Scottish families in the countryside as more hosts were required to house evacuees. Source H shows that large numbers of children had already been evacuated and found a home to stay in. This suggests evacuation had so far been successful. The poster does however show that evacuation was not organised as well as it could have been, it would have been better if all evacuees had found a host family before evacuation but this poster is advertising for more homes. The government expected 3 million children to be evacuated but only around 1.5 million actually were evacuated. ...read more.

A lot of children were shocked at the difference to their normal town life compared to that in the countryside as shown in the quote below. "Everything was so clean in our room. We were given flannels and toothbrushes, We'd never cleaned our teeth until then. And hot water came from the tap. And there was the lavatory upstairs. And carpets...This was all very odd and rather scaring." 13 years old Bernard Kops came from Stepney to Buckinghamshire and were amazed at their new home. Taken from Bernard's book The World is a Wedding. Having looked a few sources it is clear that all evacuees had different experiences and some enjoyed it others didn't. Source D is a contemporary photograph showing evacuees at bathtime issued by the Government during the war. It shows a group of evacuees bathing together. This photo is strange because there are 3 baths and no house of that period would have 3 baths, evacuees were also not bathed in large groups communally. All this photo does is confirm children were evacuated. It is most probably set up by the government to reassure people the children were clean and happy. Source A comes from a textbook written for British School by David Taylor in 1988. The book is entitled Mastering Economic and Social History. Source A has nothing successful to say about evacuation. It says arrangement did not always go smoothly, this is true as some evacuees struggled to find homes. ...read more.

After evacuation there was an aim to make welfare state where every citizen was to be looked after from birth till death. The government set this up. The Labour government who proposed the welfare state was voted into power, this showed the public wanted a welfare state. The government wanted one because the class differences and the sheer poverty stricken areas of the United Kingdom. In my opinion the process of evacuation was both a success and not a success, the organisation in other words the planning and preparation was very good the trains were on time to take the children to the destinations. The propaganda achieved its goal to get the public to sign their kids up to evacuation so this was successful as well. Transportation was well organised everything on time, the instructions given to children on what to take were concise and everyone got the message which once again shows good planning. The billeting was both successful and unsuccessful most evacuees found homes immediately, others were left right till the end and had to search for a home, there was also some mismatched with different religions and some children were abused. This was obviously going to happen but in the end even if there were mismatches the evacuees were saved from the aerial attacks. Overall I agree with the interpretation that "Evacuation was a great success", as long as it saved lives and helped in the long run the little technicalities do not matter to me and over all it was a success. 1 ...read more.