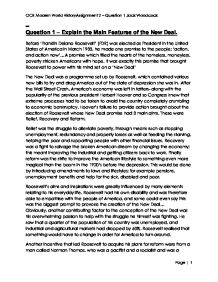 Explain The Main Features of the New Deal

OCR Modern World History (Assignment 2) - Roosevelt and the New Deal. Question 1 - Explain the Main Features of the New Deal. Before 'Franklin Delano Roosevelt' (FDR) was elected as President in the United States of America in March 1933, he made one promise to the people; 'action, and action now'...A promise which filled the hearts of the homeless, moneyless, poverty stricken Americans with hope. It was exactly this promise that brought Roosevelt to power with his mind set on a 'New Deal' The New Deal was a programme set up by Roosevelt, which contained various new bills to try and drag America out of the state of depression she was in. After the Wall Street Crash, America's economy was left in tatters- along with the popularity of the previous president Herbert Hoover and so Congress knew that extreme processes had to be taken to avoid the country completely crumbling to economic bankruptcy. Hoover's failure to provide action brought about the election of Roosevelt whose New Deal promise had 3 main aims. These were Relief, Recovery and Reform. Relief was the struggle to alleviate poverty, through means such as stopping unemployment, redundancy and property losses as well as feeding the starving, helping the poor and supporting people with other financial issues. Recovery was a fight to salvage the broken American dream by changing the economy; this meant improving the industrial and getting citizens back to work. ...read more.

Tied into the Economy Act was the Beer Act. It stopped the prohibition of alcoholic beverages in 1933, raising spirits of Americans and boosting patriotism that extra bit where it was crucial. The end to prohibition meant the government could now tax the beverages they were now allowing; beer, wine and spirits could earn the Government money, and pubs could also pay money to require a license to sell these kinds of drinks. It also meant the end to the underground crime of bootlegging where gangsters created moonshine and therefore stopped the distraction of the government, allowing them to focus more attention on turning America around. Another one of Roosevelt's main aims for the New Deal also turned his attention to Farm and Rural programmes. He was greatly concerned and believed that true reform could not be found until the agricultural market was back to normal. Roosevelt brought change to the way farms were being run, seeing as many farms were now completely penniless and their farms had been swept away by the great droughts which started in 1930. In The first Hundred Days Roosevelt greatly helped farmers by increasing the sale prices of their produce by simply limiting the amount they were allowed to engender! Roosevelt aimed many of his Alphabet Agencies at cultivation and greatly helped direct the right prices for the amount of conscientiousness the farmers were putting into their business. ...read more.

It also started unemployment benefits provided by separate states with aid from the central government. As a follow on from various other agencies, the Workers Progress Administration (WPA) was set up, giving work to a further two million people a year. Again the work was varied in productiveness but overall was very helpful to America including the planting of tree's stretching 1600km to try and regenerate soil losses from the Dust Bowl. Another important change in the Second New Deal was the Wagner Act, which supported workers who wanted to form an alliance to stop employers sacking members of the union. These trade unions began to grow, meaning that employers had to listen to their wants and needs. All in all, Roosevelt completely altered the American lifestyle. His main aim was simply to drag America out of the depression and turn it into a more prosperous land, which he did by creating his alphabet agencies, and changing American ways in his first hundred days - then emphasized in the second New Deal. He helped this main aim with the alphabet agencies through aiding the poor, needy and unemployed and also by pumping money back into agriculture and farming and revolutionizing the way that industry was being run, righting the wrongs that became apparent to him on his path to American transformation. ?? ?? ?? ?? OCR Modern World History Assignment 2 - Question 1 Jack Woodcock Page | 1 ...read more.