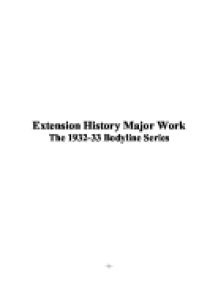 Extension History Major Work The 1932-33 Bodyline Series Synopsis Many debates have been focused around the 1932/33 Bodyline series. Some of these debates have included the effects of politics and the Great Depression throughout the series or the effect the Bodyline series had on the way the game was changed in future Ashes series encounters. However, none of these arguments have been more heavily debated than that of the ethics of the 'bodyline bowling' tactic. Whilst considered to be legal and well within the Laws of Cricket many were unsure as to whether or not it was considered to be 'in the spirit of the game'. Within this argument debate has also arisen of whether or not the English cricket team could still have beaten the Australian side even without the use of the 'bodyline bowling' tactic. Instead of the use of historians both from the 1930s and today to create a debate, major players involved in the series, such as the English captain Douglas Jardine, the Australian captain Bill Woodfull as well as the English fast bowler Harold Larwood. Other players who contributed included the likes of Bill O'Reilly and Vic Richardson. Also involved were journalists such as Jack Fingleton, who even took part in the series as a member of the Australian cricket team and one of the Test series umpires George Hele. A large number of statistics have also been employed to assist in answering the essay question. Books involving many established modern day cricket writers including Jack Pollard, Jack McHarg and David Frith were essential to the construction of this project. What was Douglas Jardine's aim in introducing the 'bodyline bowling' tactic, did he achieve his goals? Would England still have won without the use of the 'bodyline bowling' tactic? The Ashes series of 1932/33, more commonly known as the Bodyline series caused great controversy among two nations when Douglas Jardine, the English captain brought in a tactic that was considered to be 'not in the spirit of the game'. ...read more.

When looking at the Australian line-up one can see that the majority of bowlers selected with the exception of Tim Wall, were spin bowlers such as Bill O'Reilly and Clarence Grimmett. On Australian wickets in a dry summer the prevailing lbw rule made it difficult for O'Reilly, Grimmett or Ironmonger to alter the course of the test series. It is clear that the Australian side had a definite lack in pace, whereas in the English line-up accurate medium-pacers such as Maurice Tate and the leg spinner, Thomas Mitchell were cast aside for the faster bowlers such as Bill Bowes, Harold Larwood, "Gubby" Allen and Bill Voce. Both sides had competent batsmen; however it was this clear lack in bowling strength on the Australians part that lead some to believe that the Australians weren't as good as first thought. Thus, raising the question, was 'bodyline' necessary? Harold Larwood believes it was. In an interview with Harold Larwood, interviewer Norman May asks the question - Who was bodyline intended for? To this Larwood replied - "It was put on for Bradman and Bradman only!!!"19 Larwood believes the only way to combat Don Bradman was through the 'bodyline bowling' tactic. The statistics disagree. Evidence that shows the use of 'bodyline bowling' was pointless. 'In Brisbane...Larwood clean bowled Bradman'20 and his figures from the test series show that of his 33 wickets taken, 12 were clean bowled and a further 4 were leg before wicket. This shows that 'bodyline bowling' did not succeed quite to the extent as Jardine had hoped. Also, "Gubby" Allen 'played in all five Test matches and captured 21 wickets at 28 with orthodox methods'21. These figures further emphasise the fact that even without 'bodyline bowling' Jardine and his men still would most likely have won the series anyway. Another view on the Bodyline series was that it was the field placings that made all the difference rather than the bodyline attack itself. ...read more.

However, the reliability of this source can be questioned. The interview was broadcast on November 4 1982 and the Bodyline series occurred in 1932, therefore over time these player's perspectives of the events could have changed as they heard different sides of the story from other players and spectators or they may have forgotten simple details that could have possibly been vital in expressing their own opinions towards the series and their opposing team. I used the website CricInfo Australia, formerly know as www.baggygreen.com.au. This website allowed me to access all player biographies from the Bodyline series as well as the batting statistics I needed for my debate. These statistics were useful as they were accurate and did not rely on someone's opinion and I could get a definite answer from them. The statistics I got from this site also allowed me to compare other statistics such as the English batting statistics which also helped in my essay. One visible strength of this website was that it was included all statistics available from the matches and even included the oppositions figures. A weakness however was that these records were not able to tell me the match conditions that may have affected the players in the match. These match conditions include the hardness of the pitch, the temperature at ground level and the number of crowd attendance. Each of these factors could have impacted on the players and affected their concentration levels during the game thus altering the game itself. I also used a book by David Frith called 'Bodyline Autopsy: the full story of the most sensational Test Cricket series: Australia vs. England 1932-33'. Just as the name suggests this book gives the "full story". The author remains as unbiased as possible. Frith includes comments from leading personalities of both the English and Australian cricket teams as well as including various umpire reports, comments made by journalists and even spectator accounts. By providing me with all these different perspectives I was able to form a much wider view on the Bodyline series rather than just having a strictly Australian or English perspective. ...read more.