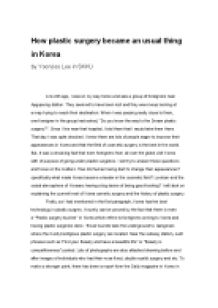 ﻿How plastic surgery became an usual thing in Korea by YoonJoo Lee in SKKU A month ago, I was on my way home and saw a group of foreigners near Apgujeong station. They seemed to have been lost and they were keep looking at a map trying to reach their destination. When I was passing really close to them, one foreigner in the group had asked, "Do you know the way to the Dream plastic surgery?". Since I live near that hospital, I told them that I would take them there. That day I was quite shocked. I knew there are lots of people eager to improve their appearances in Korea and that the field of cosmetic surgery is the best in the world. But, it was a shocking fact that even foreigners from all over the globe visit Korea with of purpose of going under plastic surgeries. I will try to answer these questions and focus on the matters. How did human being start to change their appearances? specifically what made Korea become a leader in the cosmetic field? Lookism and the social atmosphere of Koreans having a big desire of being good-looking? ...read more.

Then, what is the reason for plastic surgery being an ordinary life matter in Korea? In my opinion, lookism is a main factor that can answer this question.For better explanation, I searched up for the term 'lookism' in the encyclopedia. Lookism is a term used to refer to discrimination against or prejudice towards others based on their appearance. The term was first coined within the Fat acceptance movement. It was used in the The Washington Post Magazine in 1978, which asserted that the term was coined by "fat people" who created the word to refer to discrimination based on looks. It is notable that lookism has received scholarly attention both from a cultural studies and an economics perspective. In the former context, lookism relates to preconceived notions of beauty and cultural stereotyping based on appearance as well as gender roles and expectations. Important economic considerations include the question of income gaps based on looks, as well as increased or decreased productivity from workers considered beautiful or ugly by their co-workers. In this context, it comes to peoples' mind that appearance means a lot in their life and good-looking appearance makes ones life easier and happier. ...read more.

In conclusion, I could come up with the idea that cosmetic surgery in Korea is the most developed in the world because of two main reasons. The first one is lookism which is a term used to refer to discrimination against or prejudice towards others based on their appearance. The second one is that Koreans try to apply the same standards for beauty of the Western world; big eyes, high nose, etc. Because of these two factors, the social atmosphere has been formed in a way people feel pressured to become good-looking. The big desire of people to look beautiful had increased the demand of plastic surgery and the supply had been also increased. However, I want to give my comment that it is true that it is "a lot better" to be good-looking than being ugly but I think it would be more important to focus on the inner side of the person. Some Koreans only tend to put value on how they look and not how they think and behave. In addition to that, individuals should not go under too many cosmetic surgeries. Writing an essay about plastic surgery in Korea had led me to think very deeply about this topic and I am proud that Korea has the best skill in plastic surgery even if it was not started in Korea. ...read more.