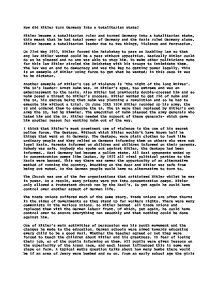 How did Hitler turn Germany into a totalitarian state?

How did Hitler turn Germany into a totalitarian state? Hitler became a totalitarian ruler and turned Germany into a totalitarian state, this meant that he had total power of Germany and the Nazis ruled Germany alone. Hitler became a totalitarian leader due to two things, Violence and Persuasion. On 23rd May 1933, Hitler forced the Reichstag to pass an Enabling Law so that any law Hitler wanted could be a pass without opposition. Basically Hitler could do as he pleased and no one was able to stop him. To make other politicians vote for this law Hitler circled the Reichstag with his troops to intimidate them. The law was an end to democracy and was the key to getting power legally. This is an example of Hitler using force to get what he wanted; in this case it was to be dictator. Another example of Hitler's use of violence is 'the night of the long knives'. The SA's leader- Ernst Rohm was. In Hitler's eyes, too extreme and was an embarrassment to the nazis. Also Hitler had previously double-crossed him and so Rohm posed a threat to Hitler's success. Hitler wanted to get rid of Rohm and the SA, his excuse being that Rohm was planning a revolution and so he had to execute him without a trial. ...read more.

All German Girls were expected to become a member of the League of German Maidens and the German boys were members of the Hitler Youth Movement. This way Hitler could control the lives of children in and out of school. The German youths had to be present at every meeting, if not somebody may inform on them. Hitler kept the youngsters fit, marching with heavy packs on their backs and cramming their weekends full with; outings and camping and sometime lectures on the National Socialist ideology. This had a bad affect on the youth's lives at school, they had no time for homework and their reports were bad. But Hitler only wanted to train these children for his mapped out future, war and Aryan families. Who needs 'miniature scholars' when they already have a future? This was Hitler's view. By brainwashing these children he could guarantee support from this generation and the ones following. Hitler focussed on the future and not what was at present. He could guarantee he would have their support when the time came that he needed it. By dismissing Non Aryans and Jews from working for the Civil service, Hitler persuaded Germans that these people couldn't be trusted and didn't deserve a job elsewhere. He put across that they were disloyal and dishonest. ...read more.

This oath ensured that the army was totally obedient to Hitler. They weren't just ready to die for Germany, they were ready to die for Hitler. He had total control of even the army. In conclusion, I think, that the most important contributing action of Hitler. In his path to becoming a totalitarian leader is the act of propaganda and censorship, in which he controlled every aspect of the media to give positive views on himself. This brainwashed the German people into believing that he was their only way out of depression and such problems they had encountered after World War one. Hitler had banned anything that was against him or that he did not believe in. Making the German people believe the same and carry the same views, this was the reason so many supported Hitler. They didn't see any of the negative views about him, as he would not allow it. The only side they did see was Hitler as the almighty Furer who would restore Germany back her pride after the problems the Weimar republic had. Without controlling the media Hitler may not have had so many followers as they may well have seen Hitler for who he really was, a very facist right winged ruler, who wanted total control over everything. Claire Fisher. ...read more.