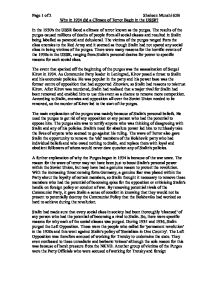 How did The Purges affect Russia?

In the 1930's the USSR faced a climate of terror known as the purges. The results of the purges caused millions of deaths of people from all social classes and resulted in Stalin being labelled as paranoid and delusional. The victims of the purges ranged from the class enemies to the Red Army and it seemed as though Stalin had not spared any social class in being victims of the purges. There were many reasons for the horrific events of the 1930s in the USSR, ranging from Stalin's personal desires for power to specific reasons for each social class. The event that sparked off the beginning of the purges was the assassination of Sergei Kirov in 1934. As Communist Party leader in Leningrad, Kirov posed a threat to Stalin and his economic policies. He was popular in the party and his power base was the former centre of opposition that had supported Zinoviev, so Stalin had reasons to mistrust Kirov. ...read more.

A further explanation of why the Purges began in 1934 is because of the war scare. The reason for the wave of terror may not have been just to boost Stalin's personal power within the Soviet Union, but may have had a genuine reason to protect the revolution. With the increasing threat coming form Germany, a genuine fear was placed within the Party about the loyalty of certain members, so Stalin thought it necessary to remove these members who had the potential of becoming spies for the opposition or criticising Stalin's handle on foreign policy or conduct of war. By removing potential rivals of the Communist Party, it gave Stalin a sense of comfort in knowing that they would not be present to potentially destroy the Communist Policy that the Bolsheviks had worked so hard to achieve during the revolution. Stalin had made sure that every social class in society had been thoroughly 'cleansed' of any person who had the potential of becoming a rival to Stalin. ...read more.

also, the growth of the army's importance and increase in defence resources posed a threat to Stalin, so the power of the army had to be cut down through the purges. The secret police, the NKVD, were even purged to make sure that even they posed no threat to Stalin. Class enemies like the Kulak's and spies were also purged due to having capitalist-like tendencies and going against the Communist policy which shows that all people are equal. In conclusion, there were many reasons as to why, in 1934, a climate or terror, known as the purges, began in the USSR. Some of these reasons were to enhance Stalin's power within the Soviet Union; other reasons were to do with removing specific social groups within society for different reasons. All of these reasons, however, contribute to the why the USSR was faced with a climate of Terror during the 1930s. Page 1 of 2 Shaheen Munshi 62B Why in 1934 did a Climate of Terror Begin in the USSR? ...read more.