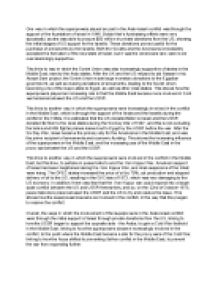 Transfer-Encoding: chunked ﻿One way in which the superpowers played an part in the Arab-Israeli conflict was through the support of the foundation of Israel in 1948. Golda Meir?s fundraising efforts were very successful, as she was able to procure $50 million in private donations from the US, showing the initial stages of US support for the Israelis. These donations proved useful for the purchase of armaments by the Israelis. Both the Soviets and the Americans immediately accepted the formation of the new state of Israel, but it was the Americans who were more overwhelmingly supportive. This links to way in which the Soviet Union was also increasingly supportive of states in the Middle East, namely the Arab states. ...read more.

It is estimated that the US donated $2bn to Israel and the USSR donated $2.5bm to the Arab states during the Six Day War of 1967, and this is not excluding the tanks and MiG fighter planes loaned out to Egypt by the USSR before the war. After the Six Day War, Israel became the primary ally for the Americans in the Middle East, and was the prime recipient of armaments and economic funding. This shows the increasing influence of the superpowers in the Middle East, and the increasing use of the Middle East in the proxy war between the US and the USSR. This links to another way in which the superpowers were involved in the conflict in the Middle East, but this time, to partake in peace talks to end the Yom Kippur War. ...read more.