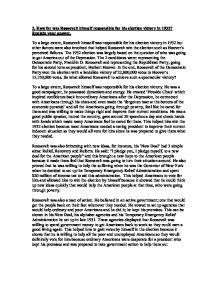 How far was Roosevelt responsible for his election victory?

2. How far was Roosevelt himself responsible for his election victory in 1932? Explain your answer. To a large extent, Roosevelt himself was responsible for his election victory in 1932 but other factors were also involved that helped Roosevelt win the election such as Hoover's perceived failures. The 1932 election was largely based on the question of who was going to get America out of the Depression. The 2 candidates were: representing the Democratic Party, Franklin D. Roosevelt and representing the Republican Party, going for his second term as president, Herbert Hoover. In the end, Roosevelt of the Democratic Party won the election with a landslide victory of 22,800,000 votes to Hoover's 15,750,000 votes. So what allowed Roosevelt to achieve such a spectacular victory? To a large extent, Roosevelt himself was responsible for his election victory. He was a good campaigner, he possessed dynamism and energy. He created 'Fireside Chats' which inspired confidence back into ordinary Americans after the Depression, he connected with Americans through his chats and even made the 'forgotten man at the bottom of the economic pyramid' and all the Americans going through poverty, feel like he cared for them and was willing to make things right and improve their current conditions. He was a good public speaker, toured the country, gave around 20 speeches a day and shook hands with locals which made many Americans feel he cared for them. ...read more.

he doesn't know but he is also prepared to listen to each member of the Brain Trust's ideas to help him come to a final New Deal. This helped him gain popularity and votes because ordinary Americans as a good listener and hired many experts to help him so the final results for all of Roosevelt's plans were bound to be good. Therefore, Roosevelt himself was responsible for his election victory because he had expert help so it showed the public that he was a good listener so if they pleaded for help; Roosevelt was probably going to give them help. Finally, Roosevelt was also responsible for his election victory because he ended prohibition. Prohibition was when the government made drinking alcohol illegal. This caused many problems because there were gangsters and corruption in the government itself. Therefore, to end all these problems, Roosevelt ended prohibition and this helped him gain many votes in the election because not only the poor and suffering would vote for him but even some gangsters would vote for him because he made their favorite past time, drinking, legal. And this ended a lot of violence because people were happy now that they could drink alcohol without being afraid of getting arrested. On the other hand, another factor that helped Roosevelt win the 1932 election was president Hoover's perceived failures. ...read more.

And example of his efforts to help Americans was voluntarism. He persuaded businesses to continue as though there was no Depression and to not cut wages or sack workers. He urged businesses to keep producing and urged people to buy but this had little or no effect because as the Depression worsened, businesses had no choice but to sack their workers and cut the wages. Hoover also tried unemployment relief by setting up the President's Emergency Committee for Employment and spent $500 million to agencies to give relief but Hoover himself didn't want to directly help people as this made them lazy and unable to help themselves and depended on the government for help. Hoover finally set up the Reconstruction Finance Corporation (RFC) which lent $2 billion to rescue banks and insurance companies however, a lot of the money went to smaller banks and banks in towns of less than 5000 people. But some of the biggest banks such as the Central Republican National Bank and Trust Company still received $90 million. In the end however, all of Hoover's actions were too little and too late so a lot of it didn't really make a huge impact and it didn't improve people's lives during the Depression. To a large extent, Roosevelt was responsible for his election victory in 1932 because of all the actions he took and although there are still some other factors that helped Roosevelt win the election, it was largely due to the measures he took to improve the lives of ordinary Americans. ...read more.