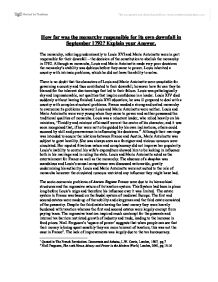 How far was the monarchy responsible for its own downfall in September 1792? Explain your Answer.

How far was the monarchy responsible for its own downfall in September 1792? Explain your Answer. The monarchy, referring predominantly to Louis XVI and Marie Antoinette were in part responsible for their downfall - the decision of the constitution to abolish the monarchy in 1792. Although as monarchs, Louis and Marie Antoinette made very poor decisions the monarchy's stability was dubious before they came to power. Louis inherited a country with intrinsic problems, which he did not have the ability to solve. There is no doubt that the characters of Louis and Marie Antoinette were unsuitable for governing a country and thus contributed to their downfall; however how far can they be blamed for the inherent shortcomings that led to their failure. Louis was pathologically shy and impressionable, not qualities that inspire confidence in a leader. Louis XIV died suddenly without having finished Louis XVI education; he was ill prepared to deal with a country with complex structural problems. France needed a strong and united monarchy to overcome its problems however Louis and Marie Antoinette were neither. Louis and Marie Antoinette were very young when they came to power and neither possessed the traditional qualities of monarchs. Louis was a reluctant leader, who relied heavily on his ministers, 'Timidity and mistrust of himself were at the centre of his character; and it was soon recognised that, if her were not to be guided by his own inclinations, others could succeed by skill and perseverance in influencing his decisions.'1 Although their marriage was intended to secure the relations between France and Austria, Marie Antoinette was subject to great hostility. ...read more.

Brienne was appointed in 1787 and attempted to pass a modified reform plan by the Assembly of Notables however the plan is again rejected. The King dismissed the Assembly and in June 1787 started to introduce reforms without their support, people resented the King's despotic actions. The Paris parlement opposed these reforms and demand that the Estate General, which had last been called in 1614, be summoned to approve new taxes. Louis ignored their opposition and on 6th August 1787 used a Lis de Justice to enact new taxes, the parlement say they will not recognise the King's Lis de Justice without approval of the Estates General, undermining the Kings authority; a debate of what role privilege should play becomes a political question of Louis's authority. In an attempt to remove opposition, on 14th August 1787, the King exiled the Paris parlement to Troyes, politically emasculating them, showing his inability to deal with the situation. As the feud continued loans became increasingly expensive and support for the parlement grew. In late 1787 the Paris Parlement started to assert its power, in an attempt to suppress their influence, the parlement's powers were stripped on 8th May 1788. The May Edicts saw much opposition and the cry for the Estates General spread across the country, Brienne realized it was impossible to resist the public demand for the Estates General and on July 5th, 1788, Louis XVI promised to summon them. The calling of the Estates General to seek approval of law changes saw the real demise of the King's power; he no longer had absolute power, he required approval from the people. ...read more.

The Brunswick Manifesto issued by the Prussian army threatened revolutionaries, although designed to help the King it reopened the issue of separation between the monarchy and the people; the idea of declaring war was to reunite the people and the King however the Brunswick Manifesto declared war on the revolution not the France. In the Summer 1792 the war was going badly for France and it seemed as if the revolution would be crushed, however at the Battle of Valmy the Austrian's were defeated, restoring faith in France but not in the King, contrary to Louis's hopes. The failure of the Absolute monarchy was largely due to intrinsic problems that were present before Louis's reign and the monarchy's lack of skill to deal with them, however the enlightenment contributed to its failure and the monarchy could not be held responsible for the deleterious impact. The constitutional monarchy largely failed because of Louis's unwillingness to compromise, Marie Antoinette's unhelpful roll and growing radicalism that Louis could have no. Louis and Marie Antoinette wore a great deal of responsibility for their own downfall; however there were factors that they could have had no influence over. 1 Quoted in The French Revolution- Documents and debates, L.W. Cowie, London, 1987, pg 7 2 Niall Ferguson, The cash Nexus, Money and Power in the Modern World, London, 2001, pg 15-16 3 Dennis Diderot, Encyclop�die, ou Dictionaire raisonn� des sciences, des arts et de m�tiers 4 Quoted in Merrick : The Desacralisation of the French Monarchy in the Eighteenth Century 5 The abb� Siey�s, What is the Third Estate? Pamphlet, 1789 ?? ?? ?? ?? ...read more.