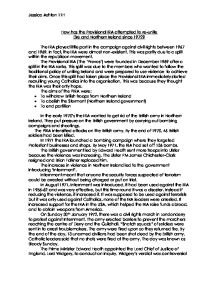 How has the Provisional IRA attempted to re-unite Eire and Northern Ireland since 1972?

How has the Provisional IRA attempted to re-unite Eire and Northern Ireland since 1972? The IRA played little part in the campaign against civil rights between 1967 and 1969. In fact, the IRA were almost non-existent. This was partly due to a split within the republican movement. The Provisional IRA (The `Provos') were founded in December 1969 after a split in the IRA ranks. This split was due to the members who wanted to follow the traditional policy of uniting Ireland and were prepared to use violence to achieve their aims. Once this split had taken place the Provisional IRA immediately started recruiting young Catholics into the organisation. This was because they thought the IRA was their only hope. The aims of the PIRA were: * To withdraw British troops from Northern Ireland * To abolish the Stormont (Northern Ireland government) * To end partition In the early 1970's the IRA wanted to get rid of the British army in Northern Ireland. They put pressure on the British government by carrying out bombing campaigns and shootings. The PIRA intensified attacks on the British army. By the end of 1970, 46 British soldiers had been killed. In 1971 the IRA launched a bombing campaign where they targeted Protestant businesses and shops. By May 1971, the IRA had set off 136 bombs. The British government led by Edward Heath sent more troops into Ulster because the violence was increasing. ...read more.

A year later the Anglo-Irish Agreement was signed by Margaret Thatcher and Taoiseach Garret Fitzgerald on 15^th November 1985. The Agreement stated: � The British government recognised the Republic's right to make proposals on matters relating to Northern Ireland � The Republic recognised a United Ireland was a long term aim which would only take place with the approval of the majority in Northern Ireland � Both governments agreed to try to make Northern Ireland a place where everyone could live in peace, free from discrimination and intolerance All the main political parties in England supported the Agreement, but neither Unionists nor Nationalists were pleased with it. Nationalists didn't like it because it reinforced partition. Unionists didn't like it because it allowed the Republic to have a say in Northern Ireland affairs. They felt that they had been abandoned by the British government. They were left wondering who was looking after their interests. In response, 15 Unionist members of parliament and one Conservative MP resigned their sears at Westminster. This caused a series of by-elections, which were accompanied in Northern Ireland by mass demonstration and violent protests during 1985-1986. These protests got no response from Margaret Thatcher and the government. The Protestant paramilitaries were against the RUC because they saw them as traitors and therefore there was an increase in violence. In 1987 Margaret Thatcher was re-elected and in 1988 the Agreement was reviewed. This left Protestants with no hope of changing the Agreement. Their campaign against the Agreement failed. ...read more.

Yet there were still problems: � Difficulty of getting the IRA to decommission their weapons � Republican "splinter" groups (Real IRA and the Continuity IRA) continue violence e.g. Omagh b**b in August 1998 In January 2000 the Northern Ireland assembly began. It consisted of both protestant and catholic ministers. Throughout 2000 there wasn't any signs of the IRA giving up their weapons. David Trimble, first minister, threatened to suspend the Northern Ireland assembly in February 2001 if there was no attempt by the IRA to dismantle their weapons. In March 2001 the assembly was suspended, which was followed by direct rule from Westminster. After weeks of negotiation, the IRA said it would move towards making their weapons useless. In August 2001 David Trimble resigned as first minister as the IRA made no real attempt to make their weapons useless. It looked like Direct Rule might be brought back and the peace process was in doubt. In October/November 2001 the PIRA agreed to had over some of their weapons. As a gesture of goodwill the British government withdrew some of the troops from Ulster. The current situation in Northern Ireland is that the Northern Ireland assembly is "working" but there still are some problems. The IRA are still being a problem because they won't hand over their weapons. Also "splinter" groups like the Real IRA and the Continuity IRA do not act under the cease-fire and continue with violent means. ...read more.