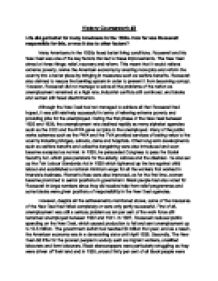 Life did get better for many Americans in the 1930s. How far was Roosevelt responsible for this, or was it due to other factors?

History Coursework #3 Life did get better for many Americans in the 1930s. How far was Roosevelt responsible for this, or was it due to other factors? Many Americans in the 1930s faced better living conditions. Roosevelt and his New Deal was one of the key factors that led to these improvements. The New Deal aimed at three things: relief, recovery and reform. This meant that it would: relieve extreme poverty, revive the American economy by creating more jobs and reform the country into a better place by bringing in measures such as welfare benefits. Roosevelt also claimed to rescue the banking system in order to prevent it from becoming corrupt. However, Roosevelt did not manage to solve all the problems of the nation as unemployment remained at a high rate, industrial conflicts still continued, and blacks and women still faced discrimination. Although the New Deal had not managed to achieve all that Roosevelt had hoped, it was still relatively successful in terms of relieving extreme poverty and providing jobs for the unemployed. During the first phase of the New Deal between 1933 and 1936, the unemployment rate declined rapidly as many alphabet agencies such as the CCC and the WPA gave out jobs to the unemployed. ...read more.

r****m and discrimination still remained as jobs were usually given to white people and segregation continued in most public places. Another issue which the New Deal did not solve completely was industrial conflict. In 1937, the Congress of Industrial Organisations (CIO) started a series of strikes in many of America's largest companies such as Ford, General Motors and General Electric. This led to rioting in many factories, which led to severe violence in most cases. Lastly, women were still facing discrimination as their wages were half the wages of men. Only about 8000 women were included in the CCC programme and the Social Security Act gave no protection for the millions of women in domestic work. Roosevelt was responsible for the improvements in the lives of many Americans in 1930s in several ways. First off, he rescued the banking system and saved many businesses from collapsing by introducing an Emergency Banking Act through Congress. This was done by closing all the banks in the country and only reopening the ones that the government decided were in good financial condition. ...read more.

For example, car-makers started to produce tanks, and makers of refrigerators and stoves started to produce military weapons. Traditional industries such as coal, iron, steel, oil and ship building dealt with the extra $175 billion of government war contracts. This boosted government spending to a level which brought back full employment to America. The wartime economy had also shown that it was essential for a Federal Government to spend a high portion of the nation's money in order to create full employment and a higher standard of living. In conclusion, although Roosevelt was hugely responsible in making life better for many Americans in the 1930s, it was the Second World War which had actually lifted America out of the Great Depression. The war created millions of jobs for the unemployed to manufacture war equipment, which put money back into the economy and boosted people's confidence. Roosevelt did contribute to improving people's living conditions by introducing the New Deal, but he could not tackle the problems by himself and needed the government's support. This was shown in 1937 when the country was hit by a second economic recession due to a cut in government spending. Therefore, it was the Second World War that brought full employment and recovery to the American economy. ...read more.