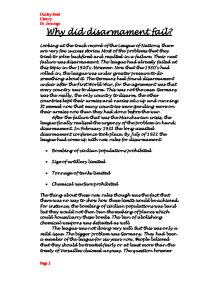 Looking at the track record of the League of Nations, there are very few success stories. Most of the problems that they tried to solve backfired and resulted in a failure. Their next failure was disarmament

Why did disarmament fail? Looking at the track record of the League of Nations, there are very few success stories. Most of the problems that they tried to solve backfired and resulted in a failure. Their next failure was disarmament. The league had already failed at this topic in the 1920's .However. Now that the 1930's had rolled in, the league was under greater pressure to do something about it. The Germans had found disarmament unfair after the First World War, for the agreement was that every country was to disarm. This was not the case. Germany was the really, the only country to disarm, the other countries kept their armies and navies e.t.c up and running. It seemed now that many countries were spending more on their armies now than they had done before the war. ...read more.

The bigger problem was Germany. They had been a member of the league for six years now. People believed that they should be treated fairly or at least more than the treaty of Versailles claimed anyway. The question however was what shall all the other countries do about disarmament? Would they disarm to the diminished size of what the Germans now had, or would they allow Germany to increase the size of their arms to the size of other countries? Going by previous experiences i.e. the 1920's, disarming to the level of Germany was an idea not much liked. The idea of letting Germany rebuild their army was also not liked as they feared that once they were strong enough they would seek revenge, in a form of war. After the conference and the following year and a half a series of events involving Germany occurred. ...read more.

Of course by this time though, all the main countries; Britain, France, Italy, Japan knew that Hitler was rearming. They started to rebuild their arms too. The disarmament conference came to a close in 1934. The conference failed for many reasons although some people say that it was 'doomed' from the very start. No one really cared about disarmament, or at least cared for it seriously. British people were starting to feel sorry for the treatment of germany after the first world war and sighned an agreement in 1935 with germany saying that it could build up it's navy, as long as it stayed under a limit of 35 percent of the british navy. France did not like this at all, nor did the other countries of the league of nations as it went against the treaty of Versailles. War was coming. ?? ?? ?? ?? Dudley Beal History Dr. Jennings Page 3 ...read more.