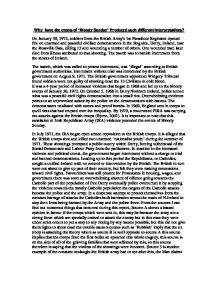 Why have the events of 'b****y Sunday' Produced such different interpretations? On January 30, 1972, soldiers from the British Army's 1st Parachute Regiment opened fire on unarmed and peaceful civilian demonstrators in the Bog side, Derry, Ireland, near the Rossville flats, killing 13 and wounding a number of others. One wounded man later died from illness attributed to that shooting. The march was to banish internment from the streets of Ireland. The march, which was called to protest internment, was "illegal" according to British government authorities. Internment without trial was introduced by the British government on August 9, 1971. The British-government-appointed Widgery Tribunal found soldiers were not guilty of shooting dead the 13 Civilians in cold blood. It was a 4-year period of increased violence that began in 1968 and led up to the b****y events of January 30, 1972. ...read more.

In reaction to the increased violence and political unrest, the government began internment without a charge or trial and banned demonstrations. Leading up to this period the Republicans, or Catholics, sought a unified Ireland with no control or intervention by the British. The British in turn were not about to give up part of their country, but felt they were making concessions toward civil rights. Favouritism was still present for Protestants in housing, wages, and government there was soon an overwhelming amount of offence going towards the Catholic part of the population of free Derry eventually police overturned it by stopping the violence towards the mostly Catholic population the targets of the Catholic attacks became the police and the army. In a desperate attempt to protect themselves from the constant barrage of attacks the Catholics built barricades across the roads of N.Ireland to stop then from being harmed by the Army and the police force. ...read more.

Source 3 is another example of the constant onslaught the British army had to see after this, the Man claims to have over heard a conversation in the pub about some soldiers going on duty to 'clear the bog' but this man we think was after the spotlight we think he was there to stir things up again, and for the soldiers sake this was not taken in too politely by the public still the army face accusations of firing at unarmed civilians. At last two reports were released by the government implying that all shall be forgotten for the truth will never be uncovered, one named the 'Saville Report' was released when the IRA ceasefire was in operation, the IRA had decided to stop fighting. And let the army do what they were sent there to do, without IRA interrogations and interferences things could cool down a little. ...read more.