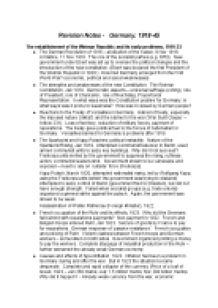 Transfer-Encoding: chunked ﻿Revision Notes - Germany, 1918-45 The establishment of the Weimar Republic and its early problems, 1919-23 * The German Revolution of 1918 ? abdication of the Kaiser, 9 Nov 1918. Armistice, 11 Nov 1918. The role of the socialist parties (e.g. SPD). New government under Ebert was set up to oversee the political changes and the introduction of the new constitution. (Ebert was declared the first President of the Weimar Republic in 1920.) How had Germany emerged from the First World War? (economic, political and social weaknesses) * The strengths and weaknesses of the new Constitution. The Weimar Constitution, Jan 1919. Democratic aspects ? universal suffrage (voting), role of President, role of Chancellor, role of Reichstag, Proportional Representation. In what ways was the Constitution positive for Germany; in what ways was it prone to weakness? How was it viewed by German people? * Reactions to the Treaty of Versailles in Germany. Hatred of treaty, especially the imposed nature (?diktat?) and the blame for the war (?War Guilt Clause? ? Article 231). Loss of territory, reduction of military forces, payment of reparations. The treaty gave political fuel to the forces of nationalism in Germany. Versailles blamed for Germany?s problems after 1919. * The Spartacist and Kapp Putsches; political instability. Nature of the Spartacist Rising, Jan 1919. Attempted Communist takeover in Berlin, used armed communist units to seize key buildings. Why did it not succeed? Freikorps units invited by the government to suppress the rising; ruthless action, communist leaders shot. Government shown to be vulnerable and exposed ? need to rely on ?outside? force (Freikorps). Kapp Putsch, March 1920, attempted nationalist rising, led by Wolfgang Kapp, using the Freikorps units (which the government was trying to disband). Attempted to seize control of Berlin (government fled to Dresden), but did not have enough strength. Failed when socialist groups (e.g. trade unions) organized a general strike against the putsch. ...read more.

Trade Unions banned, May 1933. Establishment of the One-Party State, July 1933(Nazi Party the only legal political party in Germany). Jan 1934 - all state government structures brought under direct Nazi control. * Night of the Long Knives, June 1934. Arrest and execution of the more radical influences in the Nazi party, largely those under the influence of Ernst Rohm (leader of the SA). Why? ? to secure Hitler?s unchallenged position as head of the Nazi Party; to remove the ?thuggish? element of the SA now Hitler needed to present a more respectable front once in power; to prevent pressure building from some Nazis to introduce more radical policies; to appeal to the Army commanders; to appeal to ?big business?. * Death of President Hindenburg, August 1934 - Hitler now declared as ?Der Fuhrer?. Confirmed in a public vote (plebiscite). The Army and Judges now had to swear an oath of loyalty direct to Hitler as the Head of State (both President and Chancellor combined). Nazi rule, methods of control, and impact on German people, 1933-45 Use of the Police State. Regular police brought under the control of the Nazis. But key aspects of the police state were developed under the SS, which was greatly expanded once the Nazis came to power. SS, Gestapo (secret police), concentration camps, control of judicial system (courts), use of informers. * Use of Propaganda as a means of control. Josef Goebbels ?Minister of Propaganda and Enlightenment?. April 1933 public burning of books of ?undesirable? views. Nazi control of all forms of media (newspapers, printers, radios, films) ? non-Nazi publications closed down, Nazi editors put in place, Nazi controlled film bureau, cheap radios (the ?People?s Receiver?) allowed the Nazi message to enter the vast majority of homes. Rallies and celebrations all preached the same message of Nazi supremacy and German greatness ? Nuremberg rallies. Nazis controlled all cultural aspects ? art, music, literature, theatres, etc.; - through the ?Reich Chamber of Culture?. ...read more.

Vagrants also classed as ‘asocial’ – Nazi solution was to force them to work. Vagrants sent to concentration camps to be ‘educated’ how to work. Blacks were treated in similar way to gypsies. Germans not allowed to married black people. Any children who were born to German women by black soldiers who had been stationed in Rhineland after WWI were sterilised. Mentally ill – mental illness considered to be hereditary and therefore could not be cured. Once war began, it was decided that mentally ill were of no use, and so should be killed, leading to the setting up of the ‘Public Ambulance Service Ltd’. By 1941, it had murdered 70,000 mentally ill. Homosexuals – despite the fact that some leading Nazis, such as Röhm, were homosexual, homosexuality made illegal by Nazis. 1943: Himmler ordered death penalty for all homosexuals found in SS and police. Political opposition – socialists and communists forced to work in secret. They did not work together which made them weaker. They were no match for Gestapo. Youth opposition – gangs of young people developed in late 1930s, carrying out acts of resistance as small as writing anti-Nazi slogans on the wall to offering shelter to deserters from armed forces. Army opposition – 1944: group of army officers attempted to assassinate Hitler. The social impact of Nazism on social classes; the role and status of women Most businessmen happy to live in Hitler’s Germany – profits were made, and strikes were absent. Workers now had jobs, whereas so many of them were unemployed when Hitler came to power. Nazis believed that place for women was in the home. Nazi paintings and posters showed role of women as having children and looking after their husbands – this was also taught to girls in school. Professional women forced to give up their jobs and produce children. Nazi propaganda showed family as centre of Germany, and women were at centre of family. German slogans described role of women as ‘Different, not inferior’. ...read more.