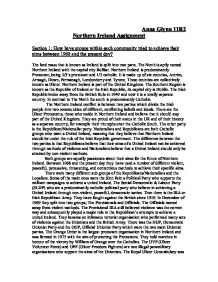 Northern Ireland Assignment Section 1: How have groups within each community tried to achieve their aims between 1968 and the present day?

Anna Glynn 11R2 Northern Ireland Assignment Section 1: How have groups within each community tried to achieve their aims between 1968 and the present day? The land mass that is known as Ireland is split into two parts. The North is aptly named Northern Ireland with the capital city Belfast. Northern Ireland is predominantly Protestant, being 2/3's protestant and 1/3 catholic. It is made up of six counties, Antrim, Armagh, Down, Fermanagh, Londonderry and Tyrone. These counties are collectively known as Ulster. Northern Ireland is part of the United Kingdom. The Southern Region is known as the Republic of Ireland or the Irish Republic, its capital city is Dublin. The Irish Republic broke away from the British Rule in 1949 and now it is a totally separate country. In contrast to The North the south is predominately Catholic. The Northern Ireland conflict is between two parties which divide the Irish people into two communities of different, conflicting beliefs and ideals. There are the Ulster Protestants, those who reside in Northern Ireland and believe that it should stay part of the United Kingdom. They are proud of their status in the UK and of their history as a separate country, for example their triumphs over the Catholic South. The other party is the Republican/Nationalist party. Nationalists and Republicans are both Catholic groups who want a United Ireland, meaning that they believe that Northern Ireland should be under the rule of the Irish Republic government. The difference between the two parties is that Republicans believe that their aims of a United Ireland can be achieved through methods of violence and Nationalists believe that a United Ireland should only be attained by non-violent methods. ...read more.

Seven people were killed. In July 1972 The IRA planted and let off 20 bombs in Belfast city centre. 11 people were killed and 130 injured. This became known as b****y Friday. In Birmingham possibly the most infamous IRA bombings occurred called the Birmingham Pub Bombings. The IRA let off two Bombs in two central pubs in Birmingham, The Mulberry Bush and the Tavern. The bombs killed a total of 21 people and injured many others. However it was not only the IRA performing acts of violence. To counter act and fight off push the IRA back to The Republic of Ireland The Unionist groups were also committing acts of extreme violence. In 1969 a Catholic named Sammy Devenney was battered to death by the RUC in his own home. Perhaps most notably, in 1972 on Sunday 30th January a peaceful protest for civil rights began in Derry. Thousands of people were involved. British paratroopers arrived and for no apparent reason shot dead thirteen Roman Catholics. Rioting soon broke out and this day came to be known as b****y Sunday. There were people however, who favored non-violent methods in attempt to achieve what they wanted. For example the Alliance Party was involved in a number of peace talks and negotiations, as were the Sinn Fein and other political parties. They believed that negotiatory tactics were a better way to achieve their aims. In the Maze prison, the most secure prison of its time, built with a unique H-block for high security purposes, another tactic was being put into practice. Republican prisoners began what was called 'the dirty protest' in 1978. They refused to wash and spread excrement all over the walls and floors of their prison cells in protest to achieve better rights to clothes for prisoners. ...read more.

This is just one obstacle that stands in the way of peace in Ireland. Other obstacles are sectarian attacks that may, as before, escalate to war. On November 9th 2002 a Roman Catholic was crucified and sectarian attacks have risen since the Good Friday agreement. Between November 2001-2002 there were 258 attacks, 92 by the Republicans, 176 by the Republicans. This could be an indicator that there may be a slide back to the armed struggle which is not wanted by anybody, but it may be inevitable if these attacks escalate enough. I think that if people's attitudes change towards one another through education of the younger generation, as it is those who govern our future, peace is possible. If children are taught to befriend others of a different religion or background, then they would not grow up seeing them as people to fight against but as people to live alongside peacefully. However the parents of this generation are firmly set in their beliefs and the Rivalry that has been passed down from the generations before them and as children learn greatly from their parents unless they are encouraged from an early age to form their own opinions then they will adopts those of their parents and the whole cycle will begin again. We can hope for peace in Northern Ireland but we have to be realistic about the future. It is impossible for both sides to get exactly what they want and unless they can see things from the others point of view and be content with and abide by an appropriate compromise then the armed struggle will begin again and war will once again break out in Northern Ireland. ...read more.