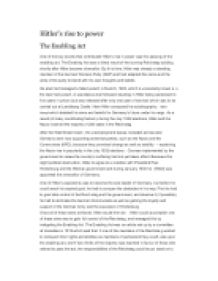 One of the key events that contributed Hitlers rise in power was the passing of the Enabling act.

Hitler's rise to power The Enabling Act One of the key events that contributed Hitler's rise in power was the passing of the enabling act. The Enabling Act was a direct result of the burning Reichstag building, shortly after Hitler became chancellor. By this time, Hitler was already a standing member of the German Workers Party (DAP) and had adapted the name and the aims of the party to blend with his own thoughts and beliefs. He also had managed a failed putsch in Munich, 1923, which is universally known as the beer hall putsch. A scandalous trail followed resulting in Hitler being sentenced to five years in prison (but was released after only one year of service) which was to be carried out at Landsberg Castle. Here Hitler composed he autobiography: Mein Kampf which detailed his aims and beliefs for Germany's future under his reign. As a result (of many contributing factors), during the July 1932 elections, Hitler and the Nazis received the majority of 230 seats in the Reichstag. ...read more.

giving them the power to pass laws, hold trials, make major decisions ect .by themselves. Passing this act was necessary for Hitler to gain power, not only over the Reichstag; but over Germany as well. If he didn't control the Reichstag, he had no power to do anything: any laws he wished to employ had to be voted on by the parliament, even with Hitler's 193 seats in November 1932, Hitler didn't hold the majority of seats. Therefore to gain two-thirds of the majority needed, Hitler had to exonerate himself of the competition and gain [more] support. In February 1933, two days before the Enabling Act elections, the Reichstag building was burnt down. Near by the scene of the crime was a communist supporter, Van der Lubber, painted with evidence that suggest he caused it. After a guilty confession from Van der Lubber taking all the blame for starting the fire, Hitler went to President Hindenburg and convinced him to activate Article 48 (somewhat of a martial law which when ...read more.

On March the 23rd 1933, the Enabling Act was passed with 444 votes against 94. Hitler had achieved goal number one: absolving the Reichstag. After the Enabling Act was approved, Hitler was well on his was to power. He only had to gain the support of the German Army and eliminate Hindenburg. These were both achieved by the absolution of the SA, lead by Ernst Roehm, in June 1934 during the Night of the Long Knives or Kristalnacht. The army were highly trained but were small in number, whereas the SA were a large number (2 million) of men who were untrained. The German Army vowed their elegance provided that the SA was removed. Leaders, including Ernst Roehm were brought to Hitler's chateau in the mountains and killed. The troops that once made up the German Army were all spread out between different units. In August 1934, Hindenburg died of old age, leaving Hitler (as chancellor) to take his place, and declared that Germany no longer needed a chancellor and expelled the position altogether making himself Der Fuhrer of Germany. ...read more.