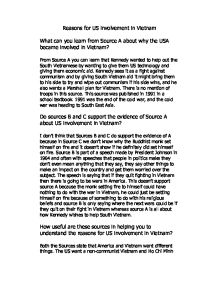 Resons for Us involvment in Vietnam

Reasons for US involvement in Vietnam What can you learn from Source A about why the USA became involved in Vietnam? From Source A you can learn that Kennedy wanted to help out the South Vietnamese by wanting to give them US technology and giving them economic aid. Kennedy sees it as a fight against communism and by giving South Vietnam aid it might bring them to his side to try and wipe out communism if his side wins, and he also wants a Marshall plan for Vietnam. There is no mention of troops in this source. This source was published in 1991 in a school textbook. 1991 was the end of the cold war, and the cold war was heading to South East Asia. ...read more.

setting himself on fire because of something to do with his religious beliefs and source B is only saying where the next wars could be if they quit on their fight in Vietnam whereas source A is all about how Kennedy wishes to help South Vietnam. How useful are these sources in helping you to understand the reasons for US involvement in Vietnam? Both the Sources state that America and Vietnam want different things. The US want a non-communist Vietnam and Ho Chi Minh wants to see the growth of international communism and that the Communist Party and his people will stay together for a peaceful, united and independent Vietnam. Source D is written by Robert McNamara who is the US secretary of Defence, so whatever he says is what the government will say. ...read more.

I agree with this view because in Source A it states how Kennedy wanted to help the South Vietnamese by giving them aid and the technology they needed. In Source D it states that the US wanted a non-communist South Vietnam and that South Vietnam must be free to accept outside assistance in order to maintain its security. And in Source F is a speech made by Kennedy saying that it doesn't matter if a nation doesn't want them to help but they will still give them the offer of their help. I also disagree with this view because Ho Chi Minh stated how he wanted Vietnam to be in his will but the US wanted to change it. The US helped the South Vietnamese fight but the US also destroyed many villages in South Vietnam because they were unsure whether they were loyal or if they were part of the Vietcong Force. ...read more.