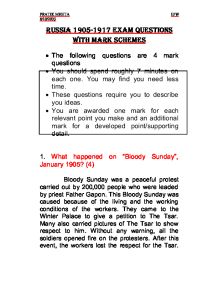 Russia 1905-1917 exam questions with mark schemes * The following questions are 4 mark questions * You should spend roughly 7 minutes on each one. You may find you need less time. * These questions require you to describe you ideas. * You are awarded one mark for each relevant point you make and an additional mark for a developed point/supporting detail. 1. What happened on "b****y Sunday", January 1905? (4) b****y Sunday was a peaceful protest carried out by 200,000 people who were leaded by priest Father Gapon. This b****y Sunday was caused because of the living and the working conditions of the workers. They came to the Winter Palace to give a petition to The Tsar. Many also carried pictures of The Tsar to show respect to him. Without any warning, all the soldiers opened fire on the protesters. After this event, the workers lost the respect for the Tsar. Also after this event The Tsar's uncle was assassinated in Moscow. 2. What were the main causes of the 1905 Revolution? (4) There were many causes for the 1905 Revolution. One of them was b****y Sunday. This event was the main event because of the open fire on the protesters. This open fire made the people angry on the Tsar. Another one of them is the living and the working conditions of the workers and the peasants; this was the main reason that started the event of 'b****y Sunday'. Even after the protest The Tsar didn't care about this. ...read more.

7 marks Source Again that cursed question of the shortage of artillery and rifle ammunition stands in he way of an energetic advance. If we should have three days of serious fighting we might run out of ammunition altogether. Without new rifles, it is impossible to fill up the gaps. A private letter from Tsar Nicholas to his wife Alexandra, July 1915. Two months before he took personal control on the Russian army 6. How far does this source explain why the Russian army was defeated in the First World War? Use the source above and you own knowledge to explain your answer. (7) This source does explain many problems of the Russian army, but it does not say all the problems that were faced by the Russian army. Surely the problem shown in the source is the main reason why the Russian army was getting weak, there are more reasons. Firstly the problems of the first aid, many soldiers were wounded very badly and were not attended to for days and days. There were soldiers who were complaining that they were wounded too much to even get up, but no one came to attend them for five days. They were left to rot in the cold weather. By seeing this many soldiers were leaving the army. This led to fewer soldiers in the army. Secondly, they were not advanced enough for the German army. The German army had many types of ammunition like rockets, missile launchers, updated machine guns, and many others. ...read more.

Most of the farmers were hardly able to grow food for themselves. The government tried to force them to give food but they were afraid that it might grow up the strikes that were already a pain for them. And because of the food shortages, there was too much inflation. The workers back home didn't get enough wages to buy food. Because of this most of the peasants and the workers were joining the March Revolution. In February the strikes were spread. This revolution was also supported by the members of the army. The Tsar's best troops were dead because of their lack in the Russian army. So the Tsar was unable to do anything. On 7 March the workers of the factories in the capital city went on strikes. They were all joined by thousands of women as it was women's day. And soon this strike spread and refused the government and also the Tsar, to stop this strike. Soon they started taking over the food supplies and even the army, the Okhrana (the Tsar's secret police) helped them. On the 15 of March, the Tsar issued the statement saying that he had abdicated. The whole of Russian was happy this day. Firstly it started because of the influence of Rasputin which led to the collapse of the army because of the wrong advice he gave to the Tsarina, which then led to the unstoppable strikes, which were even strong for the Tsar and then forced him to abdicate. According to me the strikes and the food shortages were the main reason why the Tsarist rule ended because all the reason were led to it. ?? ?? ?? ?? PRATIK MEHTA H/W 8/10/2003 ...read more.